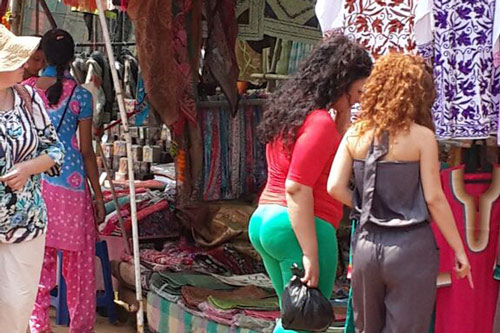 I would like to start writing about a topic which I believe is very important. No, I know it is because we often have women coming to the Ashram or writing to us about this issue: they fell in love with an Indian man over the internet and now want to meet him in India. Many times, they return to their country horribly disappointed.

Before starting, I want you to know that what I will write today and probably in the next days are thoughts and opinions based on experiences. There can of course be completely different cases and it is each time a question of the individual person, their attitude and behavior.

The most common case that we have seen however is a western woman in between 35 and 50 years old who got to know an Indian man, mostly younger than she herself, over the internet, in a chatroom or over social media. Over a longer time of talking to each other, she feels that they could be more than just acquaintances or friends. There seems to be a connection deeper than that and he keeps on inviting her to India. So why not go and find out, trust and go deeper?

I would like to tell every woman in this situation: be careful and don’t put too much of your heart into this right away! You think that this will be something serious and that you have a chance to finally find the partner of your life. Never stop dreaming – but stay realistic and know that it can very well be that this person is not as serious as you are!

On the contrary, a lot of times we have seen that women come to India and don’t even meet that man in real life. The number one thing is that you don’t even know whether the person you are talking to is real. On the internet, one can lie and place fake pictures without any fear of someone discovering the truth!

So now that you have decided to book your flight to India: make sure that you have a backup plan! Look at hotels beforehand and arrange a pickup by the hotel so that you know who will come to pick you up. Don’t just trust that this man will come to pick you up – and do you really want to be with this man the first night that you are in this foreign and so completely different country? You will be not only overwhelmed by the different culture, time zone and climate but also your emotions that are getting involved!

You can arrange a meeting point but here, too, I would advise you to be careful. Make plans just in case he doesn’t turn up, there is no such address as he gave you or all of a sudden that phone over which you always talked is switched off.

I tell you, we have seen this all. Women have come to India, had a meeting point, an address and a phone number, they travelled hundreds of kilometres by train and car only to stand in a town they didn’t know, all alone. The address was wrong, the phone number now unreachable. Nobody there to pick them up. Facebook messages and emails remain unanswered or, if the guy has at least a little bit of guilty feelings, you read an excuse about him having been suddenly transferred or the sudden death of a relative at the other side of the country where he urgently had to travel to.

Other women met the man whom they had been talking to. They spent a nice holiday together, paying the young man’s travelling fare and hotel, hoping that this will be only the first month of many years together. At the end of the time however, when they try to talk about the future, there are vague promises and they finally understand: he only wanted to have fun!

Sometimes these women end up at our Ashram after such a disappointing experience. Sometimes they were clever and careful enough to first come to us and make sure they have a safe place to return to, should it not work out. Some even took our car to drive and find this man. Most of the times, we were just happy that we could give them a place to relax and consider what happened so that they could leave India with a good experience as well, not only with disappointment.

I will write more about the emotional aspects of such situations tomorrow.

No Health-Insurance: when an Accident changes Lives – Our School Children – 27 Mar 15

Have Confidence in your Feelings – 12 Dec 09