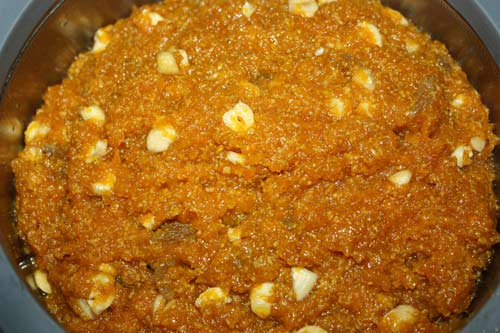 I have written the recipes for different kind of Halwa already. Although all of them are made from different ingredients, each of them has a special taste. Today I will write down the recipe for Kaddu ka Halwa, Halwa with pumpkin.

Make something different out of your pumpkins and surprise guests with a new dessert!

How long does it take to make Kaddu ka Halwa?


How to make Kaddu ka Halwa

You start by peeling the hard skin off your pumpkin. For that you obviously need to start cutting it into slices already. Once the pumpkin is peeled, grind it into a bowl.

Put a pot with milk on high heat so that it starts boiling. Keep on churning the milk for about ten minutes until it is a bit thick. When this state is there, you add the pumpkin into the milk and churn. A lot of churning will follow until the milk is fully cooked into the pumpkin and the pumpkin itself is also fully cooked.

That is the right time to add the sugar. You will notice that adding sugar will make the whole thing a bit more liquid again. Again you keep on churning until it is thick. Now you add the ghee and fry your Halwa a bit more, for about five minutes.

If you like, you can serve your Halwa as it is now or you can add cashew nuts in small pieces, raisins and cardamom on top, stir the dish a bit more and then serve it.

A delicious Kaddu ka Halwa is ready to be eaten!