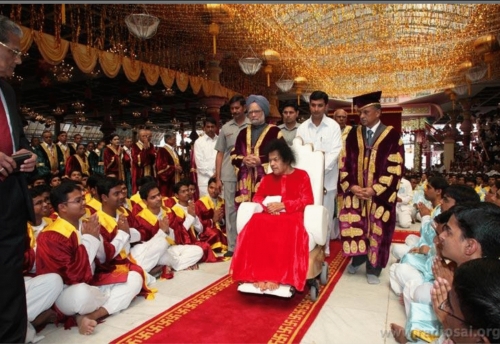 When we were still in India, on the 23rd November, we got the news that the Indian Prime Minister Manmohan Singh and many chief ministers and other high politicians of ruling and opposing party went to the birthday celebration of Sathya Sai Baba. I don’t know if you know this man who celebrated his 85th birthday but I have written several times about him without mentioning his name.

He is one of the most popular gurus of India, popular in the whole world. He is also one of the biggest and richest cheaters I know. He calls himself an incarnation of God and pretends to have divine powers. He does magic tricks and thus materializes ashes for poor and gold for rich disciples. On special occasion a complete golden egg can come out of his mouth. Usually that egg is hidden in a handkerchief in which he seemingly catches it when it appeared in his mouth.

The BBC has made a documentary about him and his cheating years ago. They showed his tricks, they had witnesses and victims of sexual assaults and harassment from his side and they also talked with politicians who, like on his birthday, come to him and openly show their approval.

I don’t understand why they go to this cheater? Don’t they see that he only tries to get money out of people? But maybe that is also their reason to go, they also get some money. It could be that their parties get some big donations from him if they go because he must be billionaire.

I actually believe that these donations and the ‘blessing’ that he gives to them helped a lot that he has never been convicted for any charges by court even after many allegations for cheating and more. He has taken care that there are many important politicians who can hold their protecting hand over his blessed head.

India is a secular country, why do politicians show their religious interest in this way in public? If they want to worship, they should do it in private! But the Indian public has a religious mind, so another reason to do this in public is to give a clear message: I am also religious, I am one of you! Especially when they are in high positions, politicians do this kind of advertising.

I actually don’t know exactly if I should be sad or angry about this. As a politician you are also an ideal, you are supposed to show people through your action what is good and what is bad. This is why it is so bad when politicians are corrupt – if they are, why wouldn’t everybody else be? And this is also why it is bad when they go to visit fake gurus and congratulate them to their birthday, whether they go for getting a donation or for getting more votes.

Here is another video in which you can see that he still does his magic tricks even though he is now in a wheelchair at his 85 years. Have a look at 3:53min: http://www.facebook.com/video/video.php?v=461967654102

Why Do Gurus Materialize Gold

Telling Indian Friends about Honesty, Punctuality and Respect in the West – 27 Nov 11