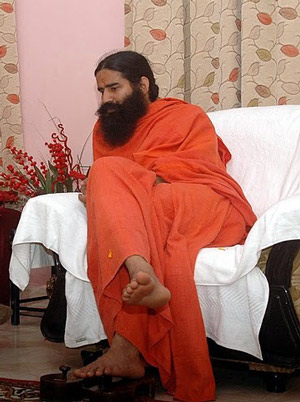 Some time ago, I wrote you a letter, but you did not answer. Well, why would you answer me, you are such a big personality. You have hundreds of millions brand value, as you said yourself, and why would such a person answer a small and simple man as me? But now I am writing to you again, to express how bad I feel for you when I see you and your current situation. Unfortunately you are the one who is responsible for it!

You had announced, quite a while ago, that you would do a fast unto death, just as Anna Hazare had done, in order to stop corruption and black money in India. In my last letter I told you that you should be clearer and more honest so that people don’t get confused. Confusion was created because you officially asked for the permission to do a Yoga camp in Delhi, starting at the 4th June, where up to 5000 people would participate in. Instead of that, you gathered 50000 people around you, started political lectures and your fast unto death. Don’t you think that this looks a bit strange and controversial? It confused people even more when you vanished for two hours, on the same day, in order to have some talk with government officials. Why didn’t you do this in public?

And finally, there is Minister Kapil Sibbal who gives a press conference and shows a letter, signed by you, which proves that you had already made an agreement with the government the day before you even started your fast! You already knew that you wanted to finish your fast on the same day! You did not tell a word of this to any of the thousands of people who had come together to support you in your fight against corruption! Why shouldn’t everyone feel cheated?

Well, you should not wonder too much that the police came and dissolved your meeting there in the night of the 4th June. Yes, I know, they may have overreacted by escorting you right back to your Ashram and we all follow this issue and feel with you. Believe me, you have my full sympathy for what has happened. First, four government ministers come and greet you at the airport when you arrive in Delhi and then they send you back in this way! This is definitely not clear and honest either. And I really condemn that they came with 5000 officers in the middle of the night and shooed away everyone who was peacefully sleeping there. Couldn’t they have done that more peacefully in daytime? They knew all along what was going on. This kind of actions should not happen in a democratic country on the name of implementing law and order. The Indian government increased their own bad reputation with this. I am happy to read news that the Supreme Court requested the government already to explain this action.

But did you already have time to think about why this happened to you and not to Anna Hazare, who did his fast just a few months before you and for the same issue? Why did the government not do this to him? Why did it happen to you?

I tell you, if the government had done this to Anna Hazare, we would no longer have this government now. People would revolt. Why? Because they were united behind this non-political man who clearly stood up against corruption. With you however people were confused: are you holding a yoga camp there? Are you doing politics? Or are you only trying to polish your political image and climb a bit higher in your political career? I could say that I told you about this before, you have to be more clean and clear!

You gave the government a justification to do what they did. You had a permission for teaching yoga to 5000 people and you started a protest. If they were not right in doing what they did, you were not right, either. People did not doubt Anna Hazare but they doubt you and this is the reason: they are still not sure who you are and what you want.

I was also not happy and a bit surprised when Anna Hazare’s fast until death stopped after only a few days. They agreed very quickly on a compromise. But with you, Baba Ramdev, this is again a fully different story! You already knew the day before, that you will not have a fast longer than for one day! Well, you had to go out there and at least show your people that you are doing something but in reality you already had signed everything and knew how it would end. You kept people in the dark. So how could anybody now believe that you really fight for them or against corruption? Anna Hazare had to stay hungry for four days until the government agreed to his demands but to yours they agreed before you even stopped eating?

Now we all should be very happy! India became free of corruption two months ago already and now you stopped even the last rest of corruption! Everything is great, India is now fully free of corruption. Do you really think people are stupid enough to believe this?

You gave people and political parties a chance to say that you are only talking about politics and now it seems clear to many people that you actually belong to the opposition party, to the BJP and to the group RSS. They tell everyone now, that you are actually a political person, interested in political success.

You see that the intellectual people of India are not standing with you, either, as they were with Anna Hazare. Why is that? I would say it is because of your strange demands and political ideas.

To give one example, you stated that all people who are proved to be corrupt should be hanged. Is the Indian Penal Code not strict enough for you? There it is written that criminals only get a death sentence in the rarest of rare cases. There are so many rapists and murderers who don’t even face death penalty but you want to give this punishment to financial criminals? While the whole world is having a debate about stopping and banning the death penalty, you advocate it! In my opinion death penalty is no penalty, it is a crime in itself. When you talk like this, it does not increase your popularity with most people and they don’t take you serious.

Another of your requests is that the 1000, 500 and 100 Rupee notes should be taken out of the market in order to stop corruption and black money circulation. Do you really believe that corruption happens because we have such big notes? In Europe there are notes of 500 Euros, which is about 30000 Rupees. They don’t have that much corruption as we do in India!

These all are reasons even for your supporters to leave you. Your ideas just seem strange to them and they are afraid of what could happen if you really get the power to implement your ideas.

Baba, let me ask you again, why did you go into politics? How great it would have been, if you had only remained a yogi or maybe even a businessman! If you had only stayed with yoga, you would not have this problem now. People don’t understand what exactly you want and you don’t make it easier for them with such events as last weekend.

I don’t have anything in particular against you and I don’t have any relation with any political party, be that the government or the opposition. Of course I support you and any fight against corruption and black money but I cannot say that I fully support you. There are just so many topics that I cannot agree on.

To come to an end with this letter I just would like to draw a short conclusion of the events of this weekend. Everybody got what they wanted:

The government got rid of their headache by removing you from Delhi. They were afraid of what could happen, they sent four ministers to come and welcome you at the airport, had negotiations with you and in the end were happy that they could send the police. You gave them every reason to, as you kept on protesting although you already had signed your agreement with them. They are happy, now you are out of Delhi.

You wanted to get more popular through this fast. You anyway never miss a chance to be in news and do every effort for it. By the drama that happened in that night you got a lot of attention, everybody wants to hear what you got to say about this and what really happened. You are now more in the limelight than you could ever have been by fasting unto death! The government made you a hero, isn’t it great?

The media are anyway happy that they now have something important to talk about. They get more viewers and readers, by that they get more money and they are just glad to have another sensation to report about.

And finally the BJP, the opposition party is happy that they can now shout out their support for you. They were waiting to be able to say that they support you but were not sure how open they can do that. But now they have another point to criticize the government and pulled you fully into politics by saying that they are standing with you.

The only ones that remain stupid and were fooled in this complete story are we, the general public of India. Fooled by you, by the government and the opposition.

I know that you will not answer this letter, either, but I remain in good hopes that you might at least consider some of my points.

Sending you much love,