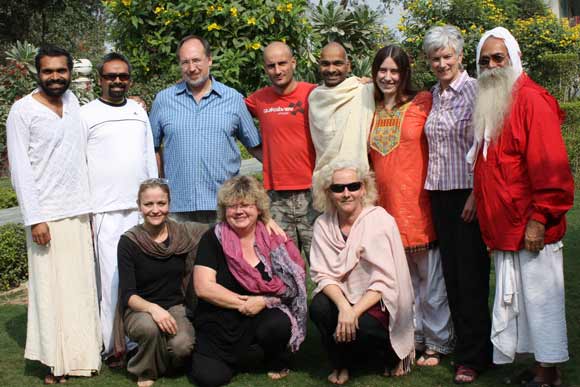 Yesterday I spent some time with the participants of our retreats. They had the chance to ask me any questions about my time in the cave or whatever else they wanted to know.

Among many other questions somebody asked:

“Do you think you were special from the beginning and you came to this earth for a special task?”

Before my time in the cave I was living the life of a guru. That is definitely something special. You are a leader, a guide for others and you are special for many people. When I came out of the cave I knew that I wanted to change this. Living in the cave showed me that we all are the same and we all are special.

“So today you don’t think that you were born for this, that you were incarnated into this role? Do you believe in reincarnation at all?”

Of course I believed in this theory or philosophy before, when I was living the role of a guru. This thought is an important part of the religion I was living in and promoting. I had believed it from my very childhood. Until I went into the cave. You can say that this changed in a slow process after my time there. I don’t believe in reincarnation anymore today.

“Why don’t you believe in reincarnation anymore? Even without thinking that you were incarnated as someone special, you could still believe in the concept of reincarnation.”

I don’t believe in this philosophy anymore because it does not let you live in the presence. Whenever you talk about incarnations, you either think of the past or the future. You either think of your past incarnations, wondering whether you have done something good or something bad which has an effect on your life today, or you think of your future incarnations and wonder what you will be in the future. What do you have to do to be incarnated as someone more holy or even to be liberated from the cycle of incarnations? What would you do however with this knowledge? If you even believe in reincarnation and think you found out who you were in the past and who you will be in future, what benefit do you get from this?

Where does this idea even came from? I guess that religion invented this philosophy in order to bring people onto the right way. They told people to do the right thing, then they would be reborn into a royal family for example. If they strayed from the right path they would however be reborn as a poor beggar. Religion made people afraid of the future with this philosophy.

I want to live in presence and this philosophy does not fit with the concept of reincarnation. If you believe in living in presence, you cannot at the same time believe in reincarnation. This philosophy simply does not let you live in presence because it raises thoughts of past and future. Even my life in the cave is only my past. My guru life lies in my past. I want to live right now and I see what I am doing now, not what I was doing before. I think of our children, I think of the work that I do today and not of what I was doing in my past, in this life or another.

Are Friends those with Similar Thoughts and Interest? – 3 Oct 10

Welcome to our Ashram for a completely non-religious Experience! – 10 Feb 15