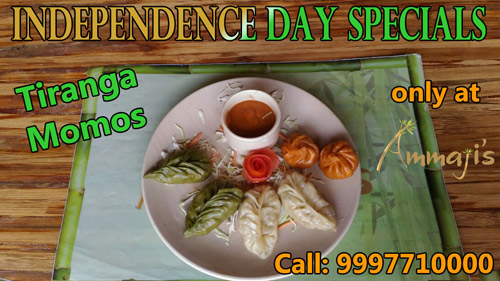 Independence Day and my Lack of Patriotism – 15 Aug 16

It is the 15th August today, India’s Independence Day! It is the day when India celebrates its freedom from the British Empire, the day when, in 1947, India’s first Prime Minister Jawaharlal Nehru raised the Indian flag. And that’s what India has been doing on that day ever since: schools across the country raise the flag, sing the national anthem and with it sing and dance to patriotic songs. Of course our school as well as our restaurant celebrated India’s independence, too – but to tell you honestly, I don’t feel the patriotisms that most fellow Indians strongly have and express.

Ramona and my grandmother hoisted the flag on our Ashram today in the morning with all the school children watching and clapping. The national anthem was followed by a beautiful program the kids had prepared: they danced, they sung and they recited poems. As always, it was great to watch and it makes the heart happy to see our children, who may otherwise not have had the chance to go to school, organize and themselves be part of this kind of celebration. We distributed biscuits among them and they left towards home early.

In the restaurant, we asked our kitchen and bakery to do something special for Independence Day – and they outdid our expectations! We got tricolor items of all kinds: pastry in the three Indian colours, tricolor dosa, pasta salad, momos and paneer – all decorated beautifully in orange, white and green! It was not only nice to look at but also very delicious! A decoration in the three Indian colours completed our Independence Day atmosphere at the restaurant.

In the end however, I did not feel any pride of being Indian, even on this day, with all our decorations, celebration and food.

I know that this is something that may shock a lot of Indians who basically have a tendency towards patriotism. It is something that is taught to relatively small children already, especially with such celebrations. I however have never had this feeling and still today don’t feel that the place that you are born in, the nationality which you somehow have by coincidence is something to be proud of. Even though I am happy about India’s independence and our democracy, I feel more international. I feel like a citizen of this earth and one of the many people on this earth.

This fits well with my wife’s attitude who, born and grown up in Germany, doesn’t have any such feelings either. In Germany, due to their history, they don’t even have such celebrations in school. The only time when the national flag comes out is during soccer games!

I know what is going on in my home country, the good and the bad. And while I always honestly appreciate anything good, there is a lot going on where we can make improvements. And that is what we are working for with our charity school. To make it a better place. That is something that I can be proud of – the efforts of my own hands, mind and feet!

Here you can see pictures of our school's Independence Day celebration