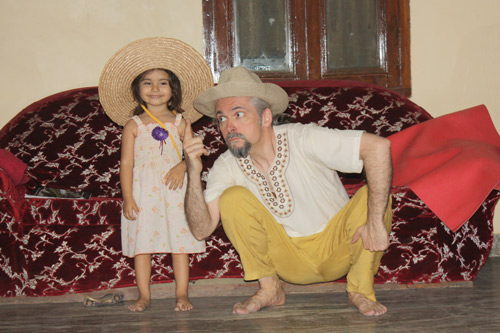 I told you yesterday about an advertisement that I didn’t approve of. It was a product designed to give parents more guilt-free time by occupying their children away from TV. While I feel that the presentation of the product was just terrible, I fully support the idea that you should get your children away from TV – because that thing is not good for them!

Obviously, one of the things also this clip said was that TV-watching children are at a higher risk of becoming overweight. Everybody understands this logic, I believe: if you are sitting in front of a TV, you quite naturally burn much less calories than by running around in the garden, or park, jumping a trampoline or catching friends or siblings! Up and down the stairs, from kitchen to living room to bedroom – children usually walk a much further distance than we adults in one day if they are not put in front of a screen!

Even more important however is that your children don’t really learn as much as you think when they watch TV! Of course, watching a TV show of making arts can inspire them the next time you are painting or doing handicraft together. That time has to come however! If they just watch the shows and never do any such thing on their own, it won’t be as helpful as you make yourself believe it is! They actually have to touch things to get to know how they feel, they have to jump and stand on one leg themselves to be able to balance, they have to really stick the paper together with glue in order to know that it works! Of course, children have the urge to do in real what they see – but you have to give them the possibility for that as well!

And with this we come to the most important part: the content of what your little ones are watching!

Okay, so you say your child only watches the children channel? When was the last time you looked at those shows critically yourself? All those high-pitched voices of cartoon characters who run after each other trying to set each other on fire, hit each other or make some sci-fi ice ball in between their hands that totally freezes the child next door because it didn’t let them sit on the swing?

No, no, no, those channels made for children are not the best thing for children to watch! There may be some useful programs on there but most of it is brainless nonsense that your child should not be watching at all! Violence, dramatic breakdowns and tantrums (worse than the regular ones that belong to development…) and more really often has its base in TV shows that your child watches while you are happy that you found time for yourself!

Get them off that thing and if you really think that you have found a great show, please sit and watch with them so that you can not only monitor what is being shown but also explain whenever they don’t understand something!

More than that however, please make your children play, invent something, get creative with them – it will help them so much in later life!