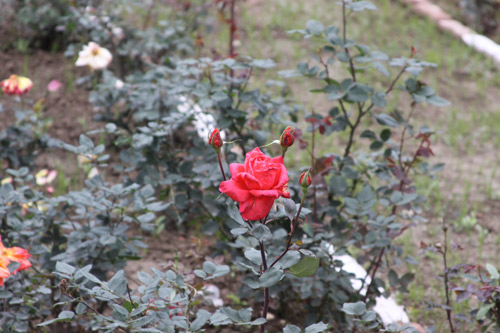 When I told you about Ramona’s experiences of violence on children in different Indian homes, you may have noticed that it was twice the grandmother of the children who actually slapped. In that time you may have rightly said that it was not the parents that used violence on the children – but none of the parents present even said a word against the elder person’s blows. And this is what I would like to write about today: the older generation, their violent education and how you have to deal with them if you want to raise your child in a peaceful, non-violent way.

First of all, tell your parents or parents-in-law or grandparents about your way of education. Tell them that you believe hitting is wrong. This may take some courage, especially if you are not used to openly telling your elders when you think they are doing something wrong. You have to understand however what is at stake: the future of your children! And that is no small thing!

Maybe you are right and the older generation is too old to really understand. Maybe you are right and they won’t learn anymore that there is a negative effect if you threaten someone with being beaten. But it is your child and you are the generation that is now in charge, active and the one who sets the tone for your child’s education. You can forbid them to hit your child. You can set a ban on threatening with violence. You have this right.

Not only the right, also the duty. If they hit your child and you are standing next to this scene, watching and not saying anything, you are guilty, too! Your child will look at you for protection and will run to you for comfort! If you don’t stop the violence, it is coming from you as well. You are being violent. Indirectly, yes, but it is violent behavior!

I tell you one more thing: also old people can learn. I agree that it is more difficult to change a behavior of decades but if you are serious and show them that you are, they will. They will do effort, you will see the effort and you can support them in their effort. But don’t let them violate your child.

I know that many people now think about what their elder siblings, parents or grandparents would do if they openly stopped them from disciplining their children by hitting them. There is fear that they might refuse further help and that the child would maybe even lose the love of their relative. If it is really love however, you don’t need to worry about it. How big can the ego of a grandmother really be? Bigger than the love for a grandchild?

If they really try to pressurize you by withholding their support, so be it. Do it on your own, cope with things in a different way but make it clear that it is not an option to hit your child.

I urge you to be strong on this point. It is important, it will strengthen your respect for yourself and it will save you from such situations when you see your child getting hurt by someone you love. I can only imagine the anger and pain that this would give you. Stop it, today!