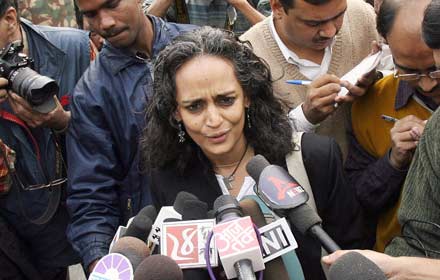 I am sure you have heard and read about the difficult situation in Kashmir, the state in the North-West of India which is just on the border to Pakistan and China. There have been problems, discussions and many violent outbreaks and conflicts about the question whether that area should belong to Pakistan or to India. There are even people who are called the ‘separatists’ who wish for Kashmir to become a separate and sovereign country. The government however does not allow groups that spread ideas against the unity of the nation, which want to separate the country because they spread hatred and create fights.

A popular Indian writer, Arundhati Roy, who has won many prizes, among them a Bookers Prize, for her books, has given a speech that created big controversies and a national outcry. In that speech she gave the statement that Kashmir has never been an integral part of India and should be its own country.

Both, the governing party and the opposition, show themselves shocked that this author made such a statement. They want to take action against her and she could as well face a sentence in jail but she refers to freedom of speech and says she just voices what many people in Kashmir are saying every day. The government also sees that it has to be careful not to give this debate and the separatists more fuel by taking strong action against Roy.

Well, in a way she is right, what she said is nothing new, we have heard this from politicians like Geelani and know that there are people in that region who believe that it would be a solution to have a separate country. Now however a popular writer expressed this opinion and used words destined to incinerate anger and hatred. Everybody should have and use his freedom of speech but you need to feel responsible for the effect of what you are saying!

You say this is the voice of people but how can you hurt and insult the whole of India in this way? If you say Kashmir has never been a part of India, then no state has ever been a part of India. Before India’s independence, there were many small separate states, so either none of the states was a part of India or all of them! Kashmir is an area loved by many people, people who live there, people in India and people all over the world. With these words you hurt them and you spread hatred.

Additionally you should think about what Kashmir would do as a separate country without the support of India! The world has seen that when small countries split off from big ones, they often are in a very bad state because they are suddenly fully on their own. Kashmir is now part of the world’s biggest democracy, India, but if they break with India, they will have difficulties surviving! They will be in a very difficult economic situation. It is a really beautiful country but this is not enough to survive!

Arundhati Roy has in the past already given statements that supported such causes and organizations, among them the Naxalites, a terrorist group. You may be a great writer, you may have won great prizes, but this also means that you have to take more responsibility for what you say. I expect this from a popular writer who has a voice and to whom people listen. Think of your responsibility and act accordingly.