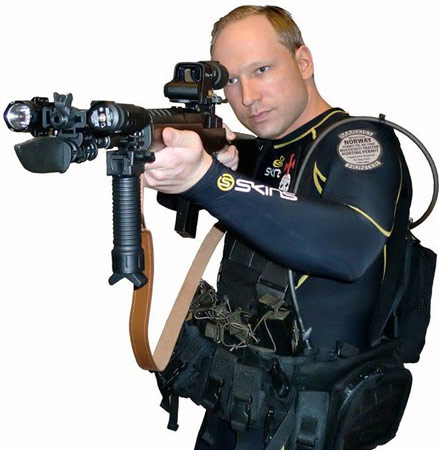 On Friday, news reached the whole world about a horrible event in Norway’s capital Oslo. A bomb in the middle of the town and a shooting on an island afterwards killed more than 90 people. This number is currently at 93 but still rising as many people remain missing, who may be dead and others lay injured in hospitals, still at the risk of their lives.

These news shocked the world. We often hear of terrorist attacks in countries like Pakistan, Afghanistan, the Iraq or Iran. This bombing and shooting took place in Norway though! This Scandinavian country is a generally peaceful country and has not seen this kind of violence since World War II! Of course people were shocked and the first suspicion on everybody’s mind was that it was a terrorist group, such as the Taliban, some fundamentalist Muslims who are fighting their Jihad. People got nearly used to this explanation whenever something tragic like this happens.

When the truth made news around the world, it shocked everyone even more: it had been a local man! One man, planting a bomb and then shooting more than 80 people, most of them between 16 and 22 years old! His name is Anders Behring Breivik. His family is in shock, too, as we all are. He started shooting in a political gathering, in the youth camp of a party and when the teenagers and young adults ran away, he chased them, shooting them down. The only word that comes into my mind in answer is just: sick.

The reason however is again similar to the terrorist attacks we have experienced in the past. With one difference: now we have a Christian fundamentalist with anti-Islamic sentiments. Again, religion is the reason, mixed with politics. He was arrested and his statement is that his actions were cruel but necessary. He believes there needs to be a revolution and if he had not started this massacre, nobody would ever have known about his ideas. He wrote a 1500 page manifesto about his ideas, political and religious. On his Twitter page one could find only one message: "One person with a belief is equal to the force of 100,000 who have only interests".

Anders Behring Breivik does not feel guilty. Neither do Islamic terrorists. There is not really any difference. Christianity, a religion that emphasizes altruism and charity towards others also has sick followers, just as every other religion. He was against immigrants and foreigners in his country, a right-wing extremist, nationalist, fundamentalist. These ideas in his mind justify killing innocent children.

We need to see that these ideas and this hate can grow in any society and wherever there are people who are not tolerant and who support this feeling of hate and violence towards others. There are people in every country and in every culture who have such ideas, who are extremists and fundamentalists. This man wrote that he spent a whole year of his life intensively playing war games, violent video games. He had a complete plan of action, posting pictures like the one above online beforehand so that the media could easily find them and enough information about him. He has learned the violence through such games and must have had enough input of hate against others to do this. He killed so many young people, only because they belonged to a party that supports immigration and living together with people of other nations and belief.

Today he will speak in court about his reasons for this attack. He has told the world before, though, that he does not feel guilty. What will happen now? How will the society react? This event should make government, media and the public aware that there are extremists and such ideas everywhere and everybody should be responsible for discouraging any similar views in order to avoid similar events in future.

My heart goes out to the families and friends of the victims, to those who have been injured and hurt and to the whole Norwegian nation. The children whom he killed may have had many dreams for their life which lay in front of them. He destroyed them violently and with full awareness. And why? For religion and politics. Do we really still need religion, seeing the effects it has?

We have to keep on working on spreading love and making people understand that there is no reason, religious, political or personal, that justifies such violence. Let your children grow up without learning violence in video games. Teach them instead to play with each other, not against each other. Show them that a child of another nation and maybe with another language is just as valuable as they are themselves. Send your love towards those who suffer now because of one violent and hating man. Pray for them and also him to find peace.