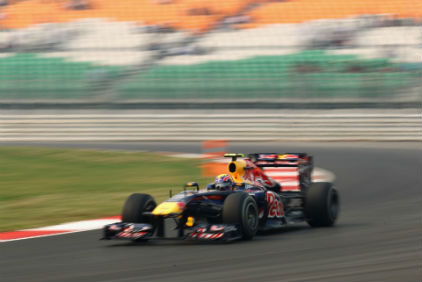 It is Monday morning after a weekend on which India’s media had only one focus: the first Formula 1 car race in India on the newly built Buddh International Circuit in Greater Noida, close to Delhi. It was very big in newspapers and TV channels. The media was full with news about the opening of the track, the race, the international drivers and celebrities like Sachin Tendulkar or Michael Schumacher and the concert of Lady Gaga at the after-party. While Bollywood stars were busy advertising this big event, I and many others were wondering.

It is a big question to me why India agreed on hosting this event. They spent 400 million Dollars on building this race track, the first one in India. They have extended the roads to the track they have made a nice and neat area around it so that drivers, international media and visitors feel good during their stay in India and can get to see greenery, clean roads and a working infrastructure. At the same time however there are people struggling to survive only a few kilometers away. Poverty and a display of luxury and wealth just next to each other. I am not the only one who criticized that. International media wrote about it, Ramona saw it on German TV news online and a friend from Luneburg wrote me that his local newspaper also published articles about this topic. So even though the German driver Sebastian Vettel won the race, German media is not very happy with the race taking place in the middle of India’s poverty.

Now tell me honestly, why did we need to have a race track here in India, in our state Uttar Pradesh, one of the poorest states in India? Do we really need to have a circular road on which race cars drive up to 330 kilometers per hour while you cannot even drive 100 on most Indian roads because they are in such a poor state? Do we need such an expensive race track in a country in which 65% of people don’t have a toilet? Do we have to spend billions of Dollars for some days of entertainment for the rich while every minute five poor Indians die of hunger? About half of Indian’s children below five are malnourished. What will this event give them, those who are hungry and in need?

They don’t get anything. On the contrary, farmers of the area, who were forced to sell their land so that the race track could get built, now complain that they were cheated about the price! They got a minimal amount so that rich people could have fun on this weekend.

It is of course something for the rich! The average Indian would not spend the 2500 Rupees, approximately 50 Dollars, for the cheapest ticket to watch cars drive around in circles and pollute the air and in their whole life they won’t earn the $200000 which are being asked and paid for the corporate boxes. I wrote my opinion about car races already some time ago in my diary. Apart from the pollution, there are more reasons to question the sense of such a race in India. Indian people have no connection to this car race. The Indian team called ‘Force India’ has no Indian driver and no Indian mechanic! And those Indians who went to see the race were mostly there because in their circle it is a status symbol to go to such events!

The media, the celebrities, they all express their pride about this event in India, saying that it is a great achievement and that we are now on international level and it would boost the economy. In reality however it only increases the gap in between the rich and the poor. The rich will get richer while the poor don’t have anything from the income that is made.

If you object now and say that our state government will earn with taxes, I have to reply that I doubt the common population will see anything of that money. The chief minister of our state, Mayawati, even granted an exemption of the entertainment tax to the organizers. This exemption was now questioned by the Supreme Court. The Central Government refused an exemption for another 1 Billion Rupees, about 20.5 Million Dollars. The sports minister said he knew he would not get an invitation after this refusal.

Even if they get a bigger amount of money due to taxes however, the money will not help those who are needy. Just recently the U.P. government built a huge park, spending 8 Billion Rupees, about 164.5 Million Dollars. Of course a park is a nice place for picnics and hanging out in beautiful greenery but shouldn’t we first take care of the basic needs of our population? What will this park help those who are hungry? They will stand around the park, begging for someone to help them!

When asked about the controversies of Indian’s poverty and the expenses for the race, the co-owner of the Indian team and billionaire Vijay Mallya answered: “The government is doing all it can to address the need of the poor or the underprivileged people, but India must move on.” Brilliant, don’t you think?

In interviews the international drivers already told how appalled they were from the contrast. Stepping out of their hotel they only had to look 100 meters to the left or to the right to see the poverty of India. They told they had never seen such a contrast of rich and poor.

We all can be sure however that there was none of those poor people at the after-party. I don’t know what the entry to that cost but they published the price for Lady Gaga’s concert. The number of entry tickets was limited to 1000 and each of these 1000 people paid 40000 Rupees, about 800 Dollars.

Everybody enjoys entertainment and wants to have fun. It is fully fine and everybody should enjoy his life. There is however a limit when the amount of money spent for this entertainment looks outrageous next to the hungry and poor lying on the street. Fun is over when you see money wasted while there are no schools, sanitary facilities or hospitals. The billionaires involved in this event should rather think about how they can improve the life of the needy. I would expect them to think of the sake of the children of their own country.

India's inaugural F1 race: speeding past the poor
Formula 1 galas and Lady Gaga: against a backdrop of poverty