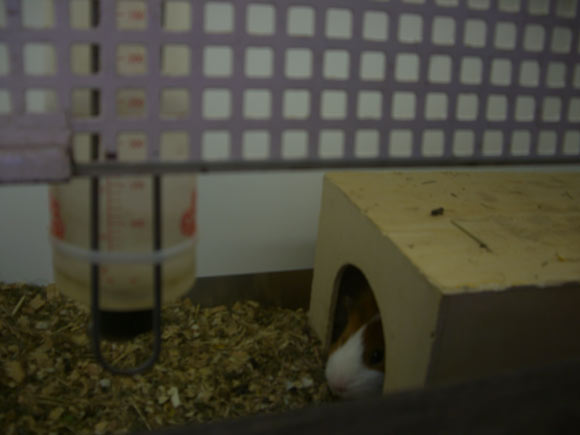 I said yesterday already that I would write something positive about having pets, too, and I wanted to write in which cases I approve of keeping pets. There are two main factors: where you get your pet from and how you keep it.

I am against shops in which they sell animals for pets, which are sitting all together in little cages, waiting for someone to take them. They were born for this purpose and are now there, displayed so that someone comes, chooses ‘the cutest’ and makes it their pet. We have gone to such a shop in order to take pictures of those animals – which was not allowed. The picture above and those of the diary entry two days ago are those which we took in that shop. In these shops they have produced an animal just like you produce a flower pot. You display all of the pots, hoping will come and like your product. But what will happen if nobody takes it? You will throw away your old pots but what do you do with the animals? You can note that in such shops you will always find young animals. What happened to the older ones?

No, this is not the way and I believe if you pick a pet in such a shop, you are not doing it out of love for the animal. In my opinion the situation is different if you pick your animal up from an animal shelter where you find those animals which were put out onto the streets by their previous owners, animals that were rescued from owners who were beating or neglecting them and even animals that have experienced the torture of animal experiments. You have the chance to give your love and a home to all these animals. They are the ones that really need someone.

And then there is the question of how you keep this animal. I already mentioned that I don’t like it when human takes the freedom of animals. I know that most of the people who have pets love animals. They want to take care of these animals and that is why they keep a pet in the first place. You need to see and realistically judge whether you are doing good to this animal by making it a pet. Can you give them a place with much nature, a big garden and everything they need, so that they can have a better life?

In earlier times, people lived together with their horses and cows, their goats and chicken, too, just as today people live with their cats and dogs. In that time, they needed the work of the animals, they were useful and the people gave them a space to live and much love. There, too, were cats and dogs and people and animals could live together in a way that was good for both. Animals did not lose their freedom, they had everything they needed and some help of humans. But in a normal modern lifestyle this does not work! You cannot live like this in the average flat in New York city, Paris or Delhi!

It is however still possible today to live together with animals in a way that is appropriate for them and that does not restrain them or limit their freedom. It is wonderful if animal-lovers have the possibility to keep animals in a natural way.

We have destroyed a lot of nature on this planet and have made it difficult for some animals to even survive without the help of human. They don’t have their natural space for living anymore. We have cut down forests and have built houses on their meadows. Their prey has fled and there is no space for them.

Additionally we have made many of these animals incapable of actually taking care of themselves. A cat that has always lived with humans and has always been fed has difficulties to naturally follow its instinct and hunt a bird or mouse. It doesn’t know anymore how to survive! We have destroyed animals in this way, too!

Due to these reasons, that we have destroyed their habitat and we have destroyed them, I can say that it is great if there are people who have the possibility to give them a space to live naturally and freely. Where they can take care of themselves and whatever they need more is provided by human. In this way, symbiosis of human and animals is possible and makes sense to me. If you love animals, this is in my point of view the only way to keep them with full love as pets.

The Disappointment when a Girl is born – even in India’s high Society! – 14 Jan 15

Sponsor Food in India as a Christmas Present – 18 Dec 09