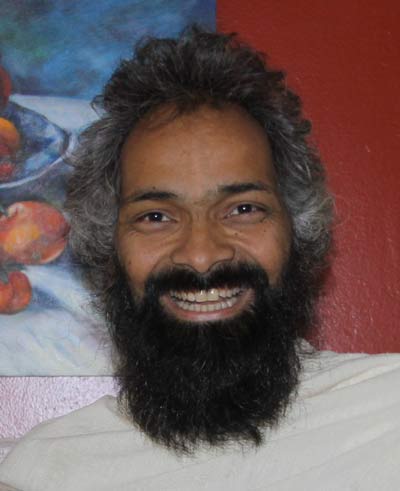 We came back from Delhi to Vrindavan. The next morning we were supposed to start from Vrindavan to Bombay by car because I had planned some program there. We had a driver who was supposed to take us there but when we arrived in Vrindavan, we got to know that one of his relatives had died and he needed to go to the funeral. We had planned to go by car and had to be in Bombay in three days for the program. What should we do now, without a driver? Well, Yashendu and I simply decided to drive ourselves.

So we started in the morning at six o’clock and headed off towards Bombay, nearly 1400 kilometers from Vrindavan. Of course we couldn’t drive the entire distance at once and so we decided to break the journey into two parts. After approximately 12 hours of taking turns in driving we reached the city Indore, about 700 kilometers from Vrindavan by six o’clock in the evening. We had done half of our way, which is pretty good in the Indian traffic and highway situation. Exhausted and tired, we arrived at the house of friends. They welcomed us, happy to have us in their home for a night. We in turn were very happy to have a nice dinner with their family and a good bed.

In the morning we started again at five or six o’clock to finish the rest of our journey. Close to Bombay the roads were better and so we were able to reach the metropolis in the afternoon. We could have decided to go by plane or train instead, but we wanted to have this adventure and experience and so we simply did it. We had fun on this long drive and enjoyed the time on the road.

In Bombay we went to an apartment house that belonged to one of my disciples, a rich man owning many apartment houses in Bombay. In one of those he had a flat which was usually empty and used only from time to time. He had offered me that I could come any time, have the keys to this flat and stay there. I had done that a couple of times before and had been to Bombay a lot so that the city felt like a second home to me. On that day, too, it felt a bit like arriving at another home again. We had called the man from the way and one of his employees was waiting at the door of the house to give us the key.

What was I going to do in Bombay? I had come to Bombay to work and also to earn some money. It was December 2001 and I had spent a good part of the year travelling in Europe where I had not yet established any connections to places or people with whom I could work. I had not really had work in that time and obviously did not really earn money either. At the Ashram and at my parents’ home however there was my family and there were students, all depending on me for their food and living. I was the one who earned money for the family, the students and the employees at that time. I had responsibility.

I did not however want to be a guru anymore. I had done the big program in Rajasthan in 2001 with thousands of people and already in that time I had felt that it was too much for me. It was too much guru drama, too much show and I had anyway cancelled any initiations. I did not want to repeat this experience in Bombay. And so I had found a way to work as a religious person, in smaller groups and without a big program.

As I had been to Bombay many times before, I had many contacts there and so I started doing rituals and ceremonies and giving lectures in people’s homes. I had called two or three other people from Vrindavan who could help with fire ceremonies and other rituals and so we went to the family homes in a small group. It was program that could be arranged spontaneously and which was for one or two days. The family called their relatives and friends to come and so we had groups of 20 to 50 people. I thus avoided getting together with hundreds or thousands of people and I did not need organizers to print posters and flyers, to advertise, to arrange tents and music and so on. I could only go there, they had everything prepared for the rituals and it was a smaller program without the big show of being a guru. In this way I managed not to get involved in too big drama and could honestly work with people.

People enjoyed these more individual programs very much. They felt honoured that I came into their homes and they came together to get blessing for the home, for themselves and for their family members. It was around the end of the year 2001, a time of new beginnings and so we did the religious prayers and ceremonies to bless everyone for the new beginning of the year. I gave some lectures, we sang Mantras and scriptures together and everyone was happy.

When we were not out for such programs, people also came to visit us at the apartment, to get blessing, to receive healing for their problems and to be in this atmosphere and energy.

We thus spent the winter in Bombay, where the weather was pleasant and not as cold as in Vrindavan. We earned with our work so that I could pay my helpers and also was sure to bring something back home. We stayed for about two months and were joined by our driver after the mourning period in his family was over. He drove the car back to Vrindavan so that we came back home at the end of January 2002.