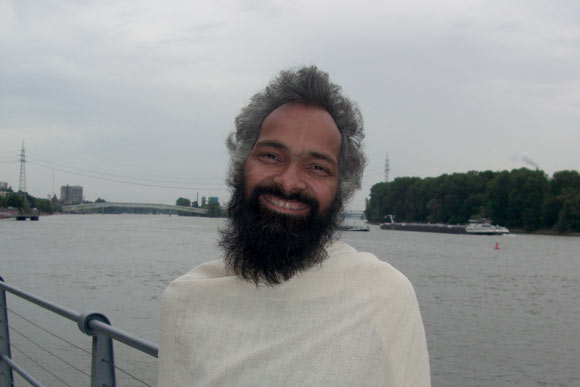 We landed in Delhi in the midday and at the airport we were welcomed by my brothers Purnendu and Yashendu. They had been looking forward to meet my German friend who had so spontaneously accompanied me to India.

Together we started towards Vrindavan. On the way, my friend had the wish to stop somewhere for a chai. He had been in India before but not in our area and he knew that you can get chai, Indian tea, nearly everywhere along the road. We stopped, took a small break and he drank his chai before we went on. It was nice to see that he felt good in his surroundings and that it was easy for him to just be there in India, in that culture.

Just as it had been the first time for me to live in the house of a foreigner when I had been with him, it was the first time for me and my family to host a foreigner in our home. We all, my whole family, were excited and happy to have him there. He stayed at the Ashram with my brothers and me and a group of students who were living there to learn Sanskrit and about the scriptures. We also still had cows at the Ashram. I vividly remember a few incidents of the time that he spent with us in India in 2001.

As it had been my habit before, we went to my parents’ house for dinner to eat together with the family every day. I remember one of those days, maybe one of the first ones of his stay, when we were at dinner in my parents’ home. As usual, my mother was cooking and my sister served the food to the plates. As usual in India, she always came to everyone and asked if they wanted more. In this way she came to my German friend and he accepted the bread, he accepted the rice, the vegetables, the dal and also when she brought it again. He was eager to taste it all and the food was really great, and so he had a really full plate and was obviously not able to eat it all. I think he just did not have the idea to say no when my sister came with food.

I had known that my friend always smoked one cigarette after dinner. He did not otherwise smoke, only one in 24 hours and that after dinner. He went outside of the Ashram to smoke his cigarettes and in the beginning he asked me, the rest of the cigarette in the hand, where he should throw it away. I looked at him and could only shrug my shoulders. I had no idea where you should throw this away! He became inventive then and we could see him how he squatted down at the road after each of his cigarettes and dug a hole into the sandy ground. He threw his cigarette rest in there and covered the hole with sand again. It was very nice to see this as he did not just throw it away anywhere but actually cared about it.

It was a great time. We laughed a lot with each other and about each other, each other’s habits and each other’s cultures. Getting to know another person and his culture in this way is really wonderful and my friend was so open to get to know more that we all enjoyed showing him around, cooking for him, talking to him and taking him to different places.

Of course we showed him Vrindavan and the surrounding towns. We went to Agra with him to the Taj Mahal and to Fatehpur Sikri. We even drove to Khajuraho, where we visited the popular Kama Sutra Temples which are of course always interesting for tourists in India. It is a distance of about 500 kilometers and we drove by car. It was Yashendu, my friend and I who went there. Yashendu and I were taking turns in driving and on the way back, my German friend wanted to drive, too. So we switched and there he was, driving on the left side of the road in Indian traffic. It may have taken a few minutes for him to get used to it but then he was pretty good and drove quite a while. He was behind the steering wheel for about two hours and we really had much fun. Until today he is the only one of my western friends who ever dared to drive our car in Indian traffic.

This is how our time together passed quickly and the last day before my friend’s departure came. When we came back from dinner at my parents’ house in the evening, we were standing in the Ashram and looking into each other’s eyes. I am a very emotional person and with the feeling of that evening and looking into his eyes, I felt tears dwell up and run down my cheeks. He also got tears in his eyes and so we were standing there, just looking at each other. I will never forget that beautiful feeling. We hugged each other tightly.

On the next day I took him to Delhi.