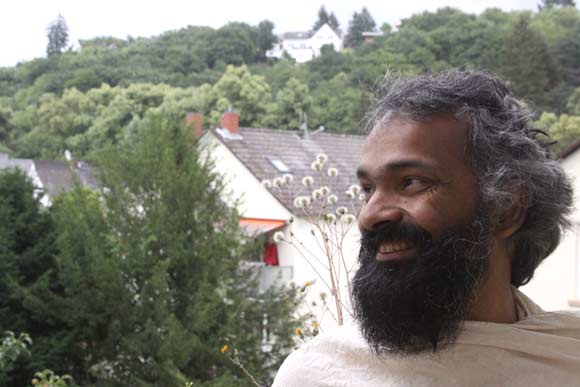 While I was in Lüneburg in November 2001, I actually started my professional work in Germany. Until then, I had only visited Germany without work. When a friend of my hosts asked whether I could help her with her back pain, I gave my first healing session in Germany. I told her some exercises, did healing as I was doing it in that time and in this way started my work. I consider those days as the starting point of my work in Germany.

In that year I still had a habit which I had got many years ago. Each day, before going to bed, I drank one glass of milk. My friend's wife, whom I told about this, started making it for me and also for their 5-year-old son and she mixed chocolate powder into the milk to make a nice and sweet drink out of it. She took good care of me.

While I was there, I told my new friend, now I am here in your house and I would like to invite you to come and visit us in my Ashram in Vrindavan. My friend asked when I would fly back to India. I told him the date, about a week or ten days later. He asked with which airline I was flying and I explained it to him. I would fly back with Virgin Atlantic from Hamburg to London and then from London to Delhi.

He noted down the date, time and flight number and told me he would accompany me right away if he got a seat in the same plane. I was surprised but also very happy. He called his travel agent, told him that he wanted to have a ticket in precisely that flight. There was exactly one seat left! He booked it and told me that we would fly to India together!

In that time this spontaneous action seemed completely normal to me but thinking of this now and writing about it I feel that it was really extraordinary. He is a doctor, a busy person and German on top of it. People in Germany use to plan everything quite a long time before and don?t usually decide such a thing spontaneously. It was really great.

I went back to Itzehoe for some days before the flight. From there I phoned my family and told my brothers that I would bring my friend to India, too. Of course they were happy and looking forward. Germany was getting cold now and I was really looking forward to going back to India.

When I left the house in Itzehoe, I locked the apartment door and as I had agreed with my Indian friend, went down the road to another friend of his, handed over the key and set off to Hamburg to catch the flight to London together with my spontaneous German friend.

In London we had several hours layover and I had planned to visit the Indian family with whom I had stayed before. Arriving in London I noticed however that my visa for the UK was not valid anymore and that I had to stay in the airport and wait for the connecting flight. My Indian host was already outside though and waiting for me! So what should we do?

I explained my plan to my German friend and he went out to meet my Indian friend with whom I was talking on phone from inside the airport. Together they went with the car to the home of the Indian family and there packed a full Indian dinner into bags. My German friend was then dropped back at the airport, fully amazed about this little episode. This is how we could enjoy rice, vegetables, dal and even chapatis, flat Indian bread, at the London Heathrow Airport.

When our flight was ready for boarding we got on and after some hours on plane landed in Delhi on the 22nd November 2001.

How negative People destroy the happiness of others – 18 Nov 13