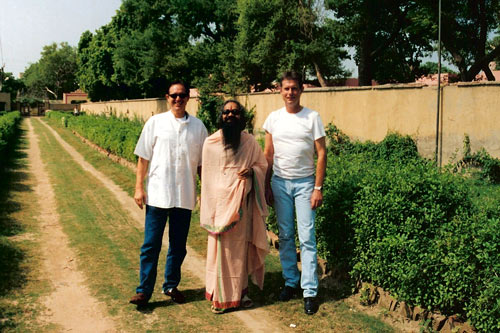 When I felt the pain in my knee on our trip to Varanasi in September 2004, it did not disturb me much but it was another reminder that my leg really needed treatment at that time. I had already started informing myself about the surgery that would be necessary for my torn ligament.

It was clear that I would have to do this in a hospital in Delhi – we just did not have any hospital in Vrindavan or the near surrounding where such surgery could have been done. So I had asked one of my friends from Delhi whether he could recommend a hospital. By chance this friend did not only know a hospital but even knew one of the doctors responsible for surgical procedures of that kind. We arranged for a meeting and I got to know my doctor. I told him about my guest from Germany, a colleague in the medical profession, and he expressed interest to meet.

When my friend was in India, I thus told him about my Indian doctor and the surgery that I would soon get done by him. He was very interested to meet a doctor here in India – and so we arranged a doctors’ meeting in Delhi. We met and started a talk but soon I was not very much involved in the conversation anymore because the doctors had found each other and started sharing their experiences. I think they both had a great time!

I was thus fully prepared for the surgery and once my German friends left India, I was ready to get my leg back to normal. For that, I would of course have to go through surgery first. So off I went to the hospital in Delhi.

My doctor was at the All India Medical Institute, one of the best hospitals in India. It is a government hospital where even the Prime Minister and President of India go to get their treatment if they need it. Doctors get trained there and there is another aspect – the treatment there is for free for everyone. If you are a normal patient in the general ward, you only need to pay for the material used on you. Obviously, if you are a VIP and take a VIP suite or special treatment, you have to pay something but in general you don’t. So I also only paid for the screws that they drilled into my knee, the painkillers and of course the anesthesia.

Oh yes, I remember the anesthesia. Well, actually I remember that I don’t remember. I had come to the hospital the night before the surgery and in the morning the procedure started. They gave me the anesthesia and I was gone. When I woke up again – I think it was afternoon by then but I cannot tell you for sure – I did not know whether I still had a leg or if it just vanished altogether. Such a strange feeling, as if your body just ends somewhere!

When the sense came back into my limbs however, the pain started. And it was very painful! I had lived with pain in this leg for many months now but this felt worse than it had been when I initially fell down those stairs! Nevertheless the doctors decided that it had been a successful surgery and that I could go home the day after.

I came back to Vrindavan and really had some rest. Some days later there was a follow-up with the doctor and sometime after that another one. With each time I could tell that it was already better, that the pain had reduced and it seemed better. I started having physiotherapy and realized soon that it was so much better now than before.

The knee healed and all that is left are three cross-shaped scars.

Children in India and their Respect towards Elders – 25 Oct 12

Not Accepting the Truth is Reason for Dishonesty – 13 May 10

Religion and the Idea of Enjoying Sex – 8 Jan 11