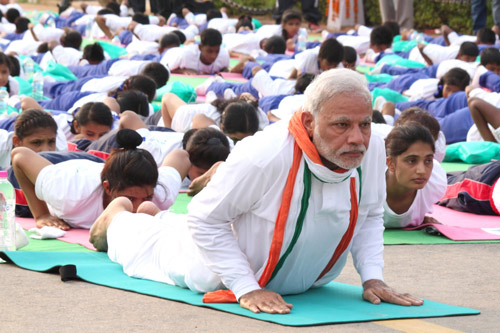 So today is Sunday once more, the 21st June which is in this year for the first time the ‘International Yoga Day’. How could I not know about it – because in India, today’s events have been in the news for days, making it a media spectacle, a show-off event and a big publicity stunt rather than a day to spread awareness of health. Why and how? Let me explain.

India’s government made an effort to get this day proclaimed the International Yoga Day and finally, with the agreement of many other countries, the UN announced that the 21st June would now be known under this name. If you talk about yoga anywhere on this earth, people know it has its origins in India. And who would really oppose the benefits of yoga? Surely not me, but behind the scenes of this day’s celebration by the Indian government, there are a few factors that show you that the spirit of yoga was not the main goal on their mind.

The Indian government has spent millions of Dollars for this day. The biggest point of celebration is of course in Delhi, where on the Rajpath, the ceremonial boulevard, the Prime Minister Narendra Modi did yoga this morning together with 35000 people – prepared a long time ago, in order to achieve a Guinness World Record. This is India’s contribution to the world.

All over India, the government has created 651 centers where there are simultaneous yoga events. Each of these centers got 1 lakh Rupees, over 1500 US-Dollars, for the realization of this one hour of yoga today. A great effort, until you get to know that they gave the responsibility for 191 of these centers to Ramdev and another 69 to Sri Sri Ravi Shankar, both of whom are far away from being yogis but two of the biggest businessmen of this field with business worth millions of dollars!

Ramdev has worked a lot in the last election to get people to vote for the now ruling party. This is quite clearly his reward. They are paying him off – and it works, as Ramdev is now all over the media with all of his products.

Finally, the government realized they needed yoga mats for all these participants. They had no better idea than import them from China! Modi, who internationally promotes his campaign ‘Make in India’, telling people that India is a great manufacturer decided to give this big business to a foreign country! Why not manufacture them in India? Or go a fully different way and have traditional grass mats made instead! Imagine how many poor people could have got employment from this event?

This is where I am actually going. I am of course not against yoga and I am not against a day of the year announced as International Yoga Day. The question is however another one. The UN recently announced India as the country with the most hungry people of the world. 194 million people daily go to bed hungry. 48% of the children of this country are malnourished. And the government spends millions on the glamour of an entry in the Guinness Book of World Records!

The labourers in this country don’t need a day of yoga in the year. They get their exercise by hard work on their fields or construction sites, trying to earn money to feed their children! What will yoga give them? And instead of giving them work, you sent the money to China!

I am sure if Patanjali was alive and could see this drama, he would hit his head against the nearest wall in disbelief!

Well, I did my yoga routine this morning, just as I do every day and that’s just what I would recommend you, too. Yoga is a lifestyle. It has to come into your daily life. One day yoga in a year is not enough and it doesn’t stop at just some exercises. Practice living in the moment, don’t worry about the future or have regrets about the past, observe yourself and be aware of your thoughts, words and actions. Help others wherever you can – for example by giving them work if they need it –instead of spending money on recognition from the outside – for example for making a World Record…

Enjoy the Presence without worrying about the future – 06 Feb 08