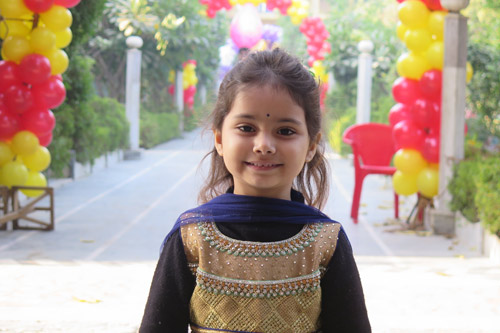 Yesterday was Apra’s fourth birthday! Just like every year, we had a blast at a wonderful birthday party with all school children, lots of guests and delicious food!

The day started in the morning with preparing for the decoration. The only thing we were planning on doing was putting up balloons – but a few thousand of them! For this purpose we had bought balloons and a machine that electrically fills air in them. Otherwise we would have needed to start blowing them up by mouth a few days before! A few experienced people started blowing air into the balloons in the early morning hours and then made colourful gates and beautiful balloon garlands out of them.

A bit later than expected, the cooks also started working. Well, I guess the fault is with our expectation and not with the cooks who excused themselves saying ‘It is so cold, nobody wants to get up so early in the morning! But anyway, they finally did get up and started preparing all the delicious food we were going to have.

At ten o’clock our main guests had nearly all arrived: our school children! Apart from them there were some other, very cherished friends who were slowly arriving – and soon we started the party off with some dance and music. It is always the greatest of times when the children start dancing wildly and everyone around forgets their shyness as well!

Apra had become hungry in the meantime – after all she had been up for several hours already, helping in preparations, receiving gifts and eating chocolate! So while everyone was dancing, Ramona sneaked away with her towards the food stalls, where noodles, potato pancakes, snacks and sweets were being prepared and got the very first bowl of noodles for Apra and the first potato pancake for her German grandfather. Sitting in the back, behind everyone, they had a delicious first taste of the party food!

It had been a good idea to feed Apra first because once the meal officially started, the school children rushed to the stalls and for a long time it was difficult to get anywhere near the food because of the children in front of the stalls, waiting to get their meal. For a good while after, they were busy stuffing all of those tasty items into their mouths, filling their bellies and enjoying the party with so delicious free food.

Some more dancing was done before we had the cake. Apra made the first cut and later everyone got a piece of the incredibly delicious chocolate cake. When she had had her share, she joined the people on the dance floor and even did a little performance – a dance she had learned during the past week.

Finally, when the children and some of our guests had left, Apra opened her gifts: beautiful dresses, colour Pencils and games!

In the end we had a calm, relaxing and delicious dinner and spent the rest of the evening in nice talks with friends who stayed over night.

It was a great birthday, a beautiful memory of Apra's birth and a nice chance to reconnect with old friends.

You can see pictures of the big party here