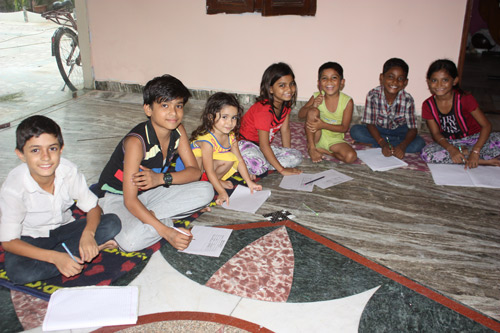 I already told you that on 1st July, the summer holidays were over and the children returned to school. Our boys, the children living at the Ashram, also returned, ready for a new year. With the ones who had already been here the year before, we had some surprise additions!

Pawan and his brother Guddu had already arrived and the next day Pranshu should reach back here as well. On that day, we got a phone call. It was Pranshu’s father and he asked whether one of his relatives could bring his six-year-old son to live with us as well. He was a simple cowherd and had financial difficulties raising his children and especially affording their education.

Mohit, the second-eldest of our boys had decided to move out, back to his family, by the end of the school year, so we had free space and told him that we would take the young boy as well. That’s how Pranshu didn’t arrive here alone: with him had come his father, his sister who is of Apra’s age and Ayush, the six-year-old, together with his father and his two sisters. The girls are called Radhika and Vanshika and they are eight and eleven years old.

You can imagine the fun that all these kids had when they were playing here altogether! Apra was more than excited to have so many friends here after the rather quiet summer and everyone was just excited. The plan was that the girls would stay for three days but they had so much fun, enjoying the Ashram atmosphere and playing with each other or Apra’s toys, that the children asked their father to stay longer. He agreed to stay until one week would complete.

Of course, when school started, they boys had to go to class and the elder girls simply followed them to school. One day, the girls told Ramona how much they loved the school and the Ashram. Finally, the elder one asked ‘Can we also stay here with you?’

Oh, that was a surprise! We all talked about it and agreed: there is no way to deny these girls such a request! Their brother would stay here, they want to learn and study – why should we say no? We will have enough space and food for two more!

I went to talk to their father and told him what his daughters had asked us. Obviously, once he got to know that we would keep his girls as well, he was more than happy! What could be better than this for the future of the girls?

So now Apra has great company, as these are the children living with us at the Ashram: Pawan, Guddu, Pranshu, Radhika, Vanshika and Ayush. It is now guaranteed that the Ashram will be filled with the laughter of children in the next year as well. Just like right now – Ramona is playing with the children, as you can see below.