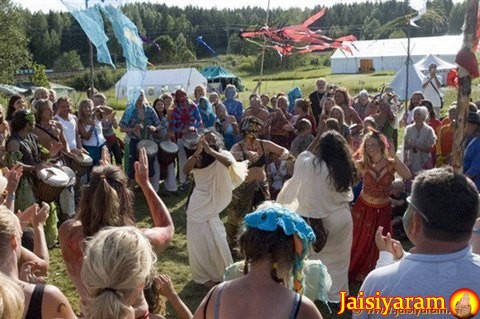 I have told you about the spiritual festival in Sweden that I gave workshops at in 2006. Today I would like to tell you a bit about an interview that I gave there – an interview on a plane!

There was a film crew from England who were preparing for a short movie about the festival. They had been filming at the different areas of the festival grounds, they talked to participants and workshop leaders, filmed some of the workshops and tried to capture the whole atmosphere.

As the whole festival was set in the beautiful nature of Sweden, in the midst of forests and at a wonderful time of the year, when it only got dark for a short time around midnight, they had a great idea for a shot: they wanted to film from above, from bird’s eye view. So they hired a small plane for four people – and invited me to do my interview up above the big festival grounds!

When I reached the small runway from where the plane was supposed to start, the cameraman and a reporter were standing next to the plane. The pilot arrived just behind me and once we had greeted each other, the reporter said, looking at the plane: ‘I don’t know, I think I am a bit afraid – that plane is quite small!’ The pilot decided to prove him that nothing would happen: he told us to stay back, got into the plane and took a small round on his own. After having landed back safely on the ground, he looked at the reporter questioningly – yes, he had relaxed a bit.

We climbed into the plane, got big earphones with microphones attached and took off! It was really beautiful to see the festival from above! The big workshop tents and the small tents that people slept in, all surrounded by the amazing nature of the surrounding.

It was quite loud but with the earphones on, we could do the interview well. There was some small talk, about my past, the festival, how I liked it and about my workshop. Finally he asked ‘I still feel a bit afraid and sick up here – don’t you? In this small plane I feel like anything could happen!’

I answered that I didn’t have any such fears. I am not a fearful person, just by nature not. First of all, I don’t actually think in this way or this direction. And secondly, if the plane really crashed, we may die – but why should I be afraid of that?

I believe that life can end at any time. We should be ready for that at any minute, not only when we do something that could possibly be a higher risk. So if you are ready to die any minute, you won’t have such fear anymore!

After about half an hour, we came back down safely – and I had been able to enjoy the view from above without the fear of falling!