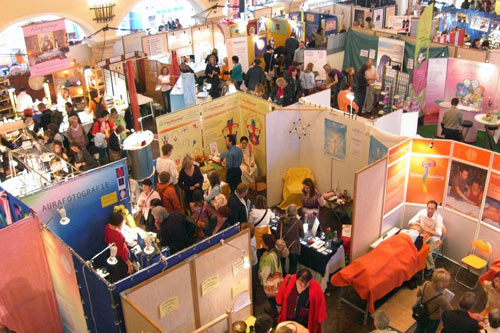 Giving a Lecture is different than trying to sell Fish! – 12 Jan 14

In the beginning of 2006, when I was still in Australia, I had an experience which made me realize how commercialized the spiritual scene already was. I was at an esoteric fair – and to the surprise of my organizers, I refused to work there.

To explain the complete story, I have to say that my organizers were themselves, too, going to have a stall at this fair. So when I arrived at their place, they told me that for the weekend they had not planned any workshops but instead wanted to take me to the fair so that I could do my work and help people there. I had already been to similar fairs and was not sure what I should really think of this. I had only ever been a visitor, not a lecturer but I knew that there were well-organized programs running simultaneously to the shopping experience at stalls and stands. So I was once more just open to see whatever would come.

We came to the big building in which this fair was taking place and my organizers straight away took me to their stall which they had already built up the day before. While walking through the hall, I took a look at the other exhibitors and their stalls. People were selling crystals, angel cards, spiritual books, singing bowls and many gift items. There were tarot card readers, clairvoyants and fortune tellers. You could get photographs of your aura, your future predicted in many different ways and even get massages in small cabins, separated by curtains. There was program, too, in a few big side halls where timetables of people’s lectures were announced in front of the door and in small pamphlets. It was a spiritual supermarket, a fair on which the selling and buying of energy was normal to everyone.

The stall of my organizers was pretty big on one of the main paths through the hall. Having arrived there, they finally told me what they were planning. He told me ‘We can separate a small area from our stall with curtains and you can give your individual sessions right here. And we will fix a timing when I will announce your lecture. Whoever is close-by in that time and has interest can just come by here, where you will be speaking!’

I was speechless at first, not sure how to say what I was feeling. In the end I started at what I thought would be obvious: ‘It is quite loud here’ and I went on to explain him that in order to give a counselling session, just a curtain would not be enough to keep out the noise and disturbance of the surrounding, so that someone would be able to relax! Additionally I would not be able to give a lecture like this, like a fisherman praising his fish in the middle of a busy market, trying to shout above the noise! I need to focus and concentrate for a lecture, I need to look in people’s eyes and see their reaction and I need their attention, too! It doesn’t work for me to have passers-by stopping and going on when they notice they are actually not interested! I am not advertising or trying to sell anything!

Someone answered, I hope half in joke, that he thought I was an expert of concentration and would be able to focus anywhere. I told him that he may be a master of this art but I realized my inability to do this. I would well be able to concentrate on myself while in a crowd but when interacting with others, I need to focus on the outside, too, have a feeling for the atmosphere of my audience and simply have to have more peace than in the middle of a busy market hall!

I guess I am just not the right person for this kind of fair!

One Reply to “Giving a Lecture is different than trying to sell Fish! – 12 Jan 14”