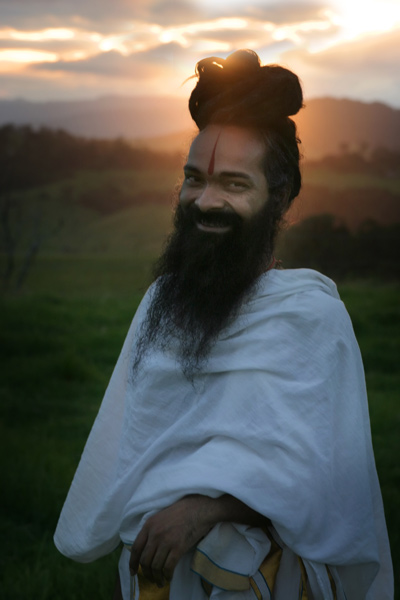 Of course, when I was at the Ashram in India in 2005 and friends from overseas had come to visit, they asked how my surrounding and especially my former disciples had reacted to the fact that I did not want to be their – or anybody’s – guru anymore. Were they still in touch? Had they been able to understand? How did they treat me now?

I had at that point left my role as a guru for several years already. I had gone into the cave in 1997 and after that had started travelling. I was then travelling so much that most of the times when people came to meet me at the Ashram, I was not even there. My family then told them that I was now mainly living out of India, travelling for a big part of the year and spending only short periods in India. So they came another time again and when I was again not there, they slowly reduced coming. Others phoned and tried to come when I was there.

When a former disciple actually came when I was there – whether he had planned that or not – I was of course there to talk to them. I was not there however to be their guru anymore. I sat down with them and I talked. I told them that I had changed and in which way. If they seemed receptive, I told them the reasons for changing in detail. A few of them could understand a little bit of what I was telling them there. Most of them didn’t. The very most of them did not return after such a visit. I was just not anymore there to tell them what to do, to fulfill their need for confirmation of their actions or tell them they were blessed. That’s how with the years the number of former disciples coming by reduced a lot.

The strangest feelings came up when people came after years of not being in touch at all and acted as though they were my closest disciples, as though I was the most important person in this world for them. They had not even phoned for five or even eight years but now they pretended as though they loved me more than anything!

It just showed me how superficial that world was which I had left behind! It was just a fake affection for the guru. I had relationships with the masses and they did not actually care. They cared when it fit for them but not any more than necessary.

There were also a few disciples who were really closer than the big crowd could be and whom I even considered as part of my family. I tried to stay in touch with them also from abroad, I phoned and met them when I was in India. After some time however, I realized that also such relationships could not last through my changes: I was not a guru anymore and they did not want to leave their role of being my disciples! No, a distance was naturally created just by this change of thought and attitude.

The main conclusion that I could take from this was that I had done the right thing. I wanted to be honestly close to people and live in a real world, not in a world with fake feelings and a display of emotions that never really existed. No, I wanted real friends, not fake disciples.