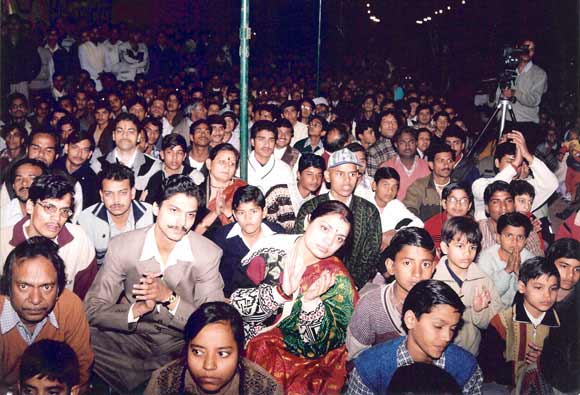 There has always been a mixed public at my programs and lectures. Of course there are always those who are there for devotional purpose and for experiencing the holiness of such an event, meeting a guru and listening to the scriptures. Others, as I told you before, are there to look for a possible partner. And then there are again others who are only there for entertainment.

You have to understand that for many people these religious programs are really the best entertainment they can imagine. It has always been like that. These are people who have a lot of time. They may be old and retired or maybe women whose husbands work and provide for the family. They have time to go to programs that go the whole morning and then start again in the afternoon.

They would of course have other possibilities to entertain themselves, too, but maybe they don’t really like going to theater halls or cinemas. Maybe they don’t enjoy other concerts but enjoy more to be in a crowd to listen a lecture with some music in between. The audiences became smaller when more and more people started having TVs in their homes. In India there were very soon TV channels that broadcasted religious programs, too, and thus people could get the same entertainment at home.

A live show is always better though and this is how people still today come to listen to preachers and gurus, also only to get entertained, not because of their devotion to god or the guru. They get carried away there and often get very emotional. Maybe you ask how they start dancing, singing and crying during the program if they are not there full of devotion. I have seen this behavior many times and it is just as if you are watching a movie that moves you and you start crying. Many people get very involved when they watch TV and emotions are obviously and naturally triggered. So if there is anything that stirs the emotions in a live program, it is just natural to let them out. If there is music, why not sing and dance along?

With time the programs had more and more of such entertaining elements. In the time of my grandfather, when the tradition of telling about scriptures started getting popular, the guru was just sitting on a stage and talking and people loved it. It was great and enough for them if he just sat there and spoke. New thinkers, inventers and artists joined the profession and they started developing the shows. They realized that the audience loves it if they don’t only get dry lectures but some music in between, too.

When I started giving lectures, it was only me on the stage and I gave lectures of two hours. Later you can say I changed with the competition of the market and integrated musicians into my program. There was more music, thus more dance and a whole new charm to the event. There were always ideas to make it even nicer and this is how, when we had the possibility, we started installing screens in the back of the tents so that people in the back could also see the show. It was not anymore only about hearing, you wanted to see, too!

Nowadays those programs often resemble a complete musical. The organizers or the performers find someone to dress up like Krishna and some more people for other roles, who then dance and perform along with the main ‘artist’, the guru. People get something to see and get full entertainment.

In Vrindavan there are however many people who are still against those nice little additions to the preaching lectures. They believe by adding music and dance into the program, the preachers destroy the traditional way of preaching. Conservative, orthodox believers don’t want to see colourful costumes and don’t want to hear people sing. They only want the lecture and are often angry about the enhancement, saying that it loses its value. I did it because I saw that I made people happier and enjoy more and I still don’t see anything wrong in this.

We had very good program and enjoyed it very much.

Teenagers having Sex for Money? Look at their surrounding! – 9 Apr 15

How to fight Feelings of Loneliness – 12 Nov 14

Dharma and Adharma in the Society of Today – 11 Oct 09