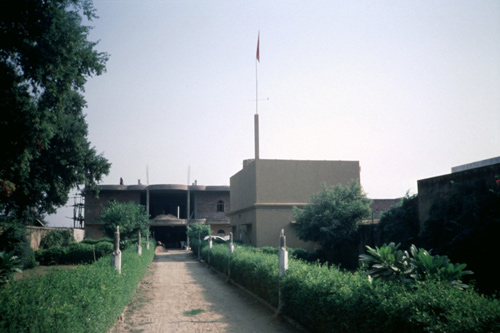 Refusing a Guru’s Initiation means getting into an uncomfortable Situation! – 21 Jul 13

When my German friends, whose Indian wedding I wrote about last week, came to India in 2005, they had another experience which is quite funny and which could happen to more people when they come to this country. Let me tell you about it.

When they arrived at the Ashram, they were actually, well, a little bit surprised. We had just built the second floor and some work was still going on, the building was very obviously still in process, the pathway was just a sand road and while the walls were nicely plastered, they were not painted yet.

They had the best room which was available and although it was very simple at that time, they started enjoying their time. They had been invited by another person in Vrindavan, though, the priests of a temple with an old music tradition that my friend was interested in. They felt honoured to be invited and told my brothers that they wanted to go there, too. That visit turned out slightly different than expected!

They went there and found out that the person, the musician, whom they wanted to meet was not there. And there didn’t seem to be any of the music program that they were expecting. That didn’t stop the priest’s family from welcoming them however and inviting them to stay. The women of the house prepared food – typically Indian and thus typically hot – urging them to take more again and again. Polite as they were, they ate way too much, also realizing that they really did what they could to make them feel welcome. The feeling somehow did not really come though. They had the feeling that the family was expecting something of them and soon they knew what it was: my German friends were asked to take the initiation of their guru!

Now luckily they did not feel obliged by the nice welcome to take that step! My friend had already made some experiences in India and knew that such an initiation meant that you should be of service to the guru, listen to his wisdom, follow his advice and of course also dedicate a part of your income to the guru – it includes a lot of duties and can lead to a lot serious consequences. They tried to decline as politely as possible but already felt that through this, the atmosphere had changed! The family got a bit pushy about the issue and were visibly not happy with their refusal. They saw however that they couldn’t change it and finally accepted it.

Our friends were showed to their room – a very simple room with a plank bed, a wooden board with a bed sheet – but no mattress. Mosquitos were all over the room. After they had been shown their room, they were told that they would be expected at the evening ceremony in the temple and for a meeting at four o’clock to walk the 10-kilometer pilgrimage walk around town. My friends were understandably not very happy with the situation.

That’s how they were sitting in the temple, obediently watching the evening ceremony, contemplating how to get out of this situation. They absolutely didn’t want to stay there – but felt it would be completely impolite to leave!

In that moment, like an apparition, Purnendu entered the temple, clad in shining white clothes with sunglasses. He came in, sat next to them and simply asked ‘How are you?’ The whole story bubbled out of them with all their unhappiness and uncomfortable situation. Surprised he looked at them and said ‘If you don’t want to, just don’t stay there, come back to the Ashram!’

This is how they came back to the Ashram, after Purnendu had, in polite words, explained the priest’s family their situation. From that moment on they didn’t see the unpainted walls, their room felt like their own bedroom and the construction site – not disturbing them anymore – was paradise.

The moral is that you should follow your feelings, do what makes you happy – and remember that India always brings you in adventurous situations!

Writers: feel honoured when someone copies your Content! – 1 Sep 14

Take a look around you and see whether someone is hungry! – 4 May 15