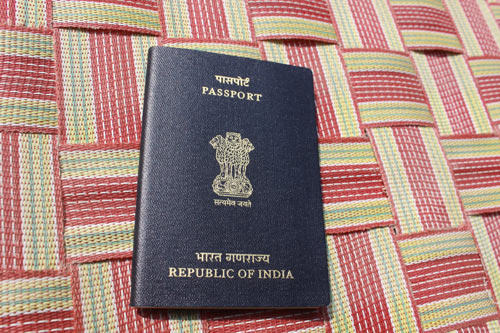 No problem, I thought, nowadays one can apply for a passport online. I did and in that application right away noted the changes from my last passport: change of address, as my previous address in the middle of town was written in the old passport, a change of appearance, as my old passport picture still showed me with long dreadlocks, causing airline staff to triple-check my identity at check-in time and finally my marriage to Ramona, as the spouse is mentioned by name in the Indian passport.

The application went through and I got an appointment at the passport center in Ghaziabad. I brought all the required documents including the international marriage certificate which we had had issued at the German registrar at our wedding. Seeing this, however, the official handed it back to me and told me that it would need to be attested, as a proof that this foreign document was valid. My application would not be taken without this. It didn’t help to tell him that we had especially had this international version issued in case we would ever need it in India!

Well, so I returned and tried to phone at the place which he had mentioned for getting our certificate attested. They told us they were not anymore doing that work, I would need to call the Ministry for Foreign Affairs. I got an appointment there and both, Ramona and I took another trip to Delhi. After entering the impressive building with tight security checks, we reached the office of the lady I had contacted – only to be told that the stamp of the registrar on our certificate was not enough! We needed an apostille. Where would we get that, we asked.

It was twenty to twelve and we knew the embassy would close for the public at twelve noon – so we rushed out of the building of the Ministry of Foreign Affairs and drove straight to the embassy. We reached five minutes to twelve – and after presenting our case were told to please send an email with our request! Oh well, so we went home again.

Upon our email, the embassy replied: they would do an exception for us against a fee but only with one condition: if the registrar in Wiesbaden, where we had got married, would confirm the validity of our marriage certificate!

So Ramona wrote to and called the registrar. After several emails and phone calls, during which they first suggested to have a friend go to the city council and get an apostille there and then have it registered at the Indian embassy, they finally agreed that they could make an exception, too, and write to the embassy.

With that done, I went to the embassy again, from there to the Ministry of Foreign Affairs where I finally then got the attest that I needed for the passport office. I registered another appointment and was able to get in. My documents were scanned and I was passed on to level two. That officer looked at my address proof – my bank account statements – and declined. What was wrong, I asked? He said I would need a passbook with a photo inside as an address proof of an Indian bank.

I had to go home once more. A trip to the bank yielded no results: they don’t give out passbooks with photos! I didn’t find any other option for an address proof and went to get the one they asked for: I opened a new bank account at an Indian government bank! A day later, I had a passbook with photo in it!

I reached the passport office in Delhi once more. I reached the counter. I presented my documents. When the officer looked through my case and papers however, he took a look at my old passport picture and at me and said ‘We should actually get an affidavit that this is really you’! I looked at him in desperation and said ‘Please just let it go through, you know it is me!’ He smiled at me then and accepted it.

I was still not done though! They still needed to do a police verification that I was really living at my newly entered address! For that, they sent the papers to the local police station and we received a call. The officer told me that he would come and have a look at some identifying papers, such as my high school report card! Oh, so we took that out and when he was finally here, showed him what he wanted to see.

After that it took another two weeks until the passport was finally here. It took two months all in all but now it is here!