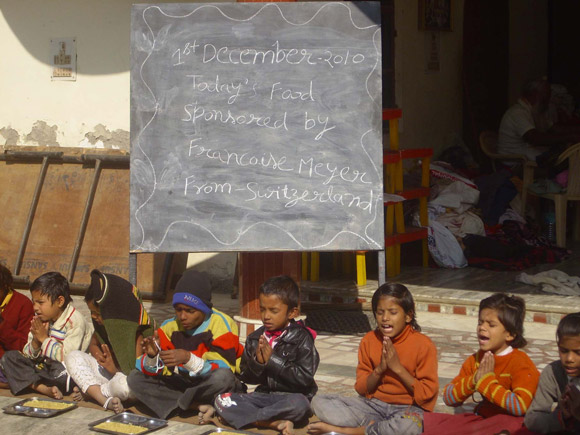 In Hindi we have a proverb which says that rich people are stingy. I talked about this with several friends who told that this proverb exists in other languages, too. I know that this is only a general proverb but as often, proverbs have their base and root in reality and in common patterns of behavior that some wise people have noticed.

I have actually noticed many times that it is true, even if I like to say it the other way around. When dealing with public and being with people in India as well as in other countries I have always experienced what a big heart people with less money have and how much they give to those in need. I don’t want to say ‘poor people’ but I want to make clear that I am talking about people who have enough to live and to survive with their family but not much more than that. They enjoy small things and find their reasons of happiness in every day’s life. I have seen many times that they have open hands for others and unfortunately often much more open than the hands of better-situated people, people who live in a lot of abundance.

You can notice it if you compare the ratio. A person who earns 100 Rupees gives 10 Rupees to charity and is happy that he can give. He knows and says that this is only a small help but that maybe if many people contribute, it can grow to be a big support, too. In comparison a person who earns 100000 Rupees would usually not give 10000 Rupees to charity – which would be the same percentage. It seems a lot to them. Of course it is a lot of money but the person with a smaller income actually gave the same part of his salary! It is only an example but I feel that people with the bigger and fuller purse have more hesitation to give. Maybe I see this in a wrong way and they actually have a bigger purse because they open it so rarely?

Unfortunately this makes them much poorer from the heart. They would have the capacity to support a lot but they don’t do it. Don’t you think, they could actually live with a little less and still have a lot more than others?

I often have this feeling with rich people in India. Everywhere you can hear and really see with your own eyes how much poverty we have in India. Still however in September of this year you could count 69 Indian billionaires. And among the current five richest people of the world two are Indian! Do these 69 people help others surviving?

If people could open their hearts and their treasures, how many children could go to school, how many hungry stomachs could be filled! It is a pity that those who only earn a little so often give whatever they can but those who earn more don’t give in that ratio. If people just had a bigger wish to support each other, how beautiful this world could be.

I also know that there are many rich people who give a lot and with open hearts. Some of them may have been among the billionaires of this world if they did not do that much charity and many lives have actually been saved or improved through their financial support. Of course those 69 Indian billionaires also are employers for thousands of people and thus help them to survive. Everybody needs to see in his own heart how much he can help. If you can, in any way, please do it.