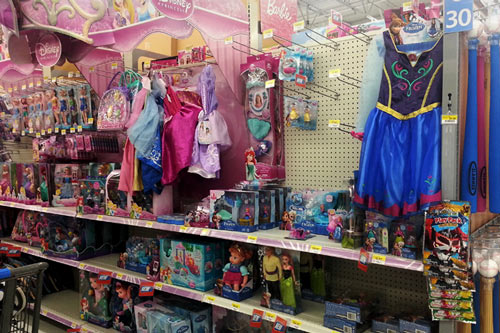 Putting Film Characters on Clothes – not for the Kids but for Profit of Companies! – 21 May 16

A few days ago, I told you how much fun Apra had in Germany with just seeing the raindrops on our car! When we have been out there, I saw Germany from the eyes of a father of a four-year-old. While there are so many things that are really wonderful for the small ones, there are others which, I believe, are rather made for the benefit of adults, not children! One of these has to do with the story I told you about yesterday: Elsa and Rosa.

We went shopping a few times for different items. One was underwear for Apra. Already on our last trip to Germany, we went to buy underwear for her and reaching the floor of the garment store where kids’ underwear could be found, there was a surprise for Apra: underwear with pictures of Elsa and Rosa on them! Wow!

We bought them then and when we needed underwear again now, Apra got excited: ‘Can I have ones with Elsa and Rosa again?’ So we went for shopping with Apra’s German grandparents. And you cannot believe how many Elsa and Rosa we found in the stores all over the place! It was not only underwear, you could get shirts, pants, skirts, bags, caps, gloves, hairbands, socks, swimming suits and basically everything with images of Elsa and Rosa on it!

We managed to get out with only the underwear that we wanted to get. That is mostly due to the fact that she, herself was a bit overwhelmed with all the things she could see in the big mall we were in. Ramona however told us upon leaving the store: “If we lived in Germany, I would probably tell Apra that we would not buy anything with a face on it!” As we spend most of our time away from this massive offer and overwhelming marketing, it is alright if she gets such items from time to time.

Here, I really see the benefit of living in India and in a town like Vrindavan: we don’t have this overdose of offers! You can say that we don’t have the choice but when it comes to this way of marketing for the small ones, it is a big advantage!

Brands, images and children’s movie characters are not promoted mainly for pleasing the young ones. The main aim is to make them want more and more so that they pester their parents who then feel compelled to buy more and more – which ultimately fills the pockets of big corporates.

No, it is not the joy of children which is the first purpose here. And that’s how I am very happy that Apra has not developed the attitude of ‘I want this all’, probably due to our life in a small Indian town!

Another Celebration and a Surprise for the Children – 19 Oct 15