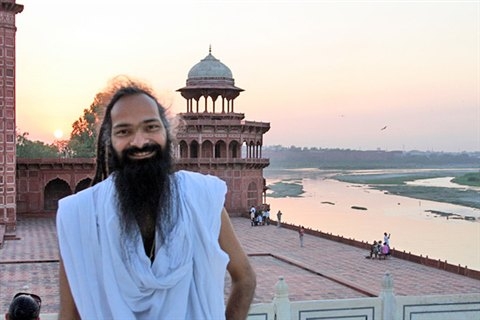 Yesterday I said that it is not good to waste something in rituals that can be used to feed hungry children. And there are so many hungry children and adults in this country. With our charity projects I am helping some of them but I would love to just have lots of food that I can give to everybody.

Many times people have shown me that someone has materialized a gold pendant and given it to them. Then they ask me if I believe in this and I will say I only believe in materializing love, not gold. Those who claim that they can do this, like Sathya Sai Baba from South India, why don't they buy food from this gold for those who are starving? Why are there so many cases in which a father killed his family and finally commits suicide because he could not afford feeding them? Why can't those people who materialize gold also make this world wealthy and give food to everyone? It is not only in our country that people die of hunger and thirst; in the whole world this miracle would be needed. Why can't they help the poor?

When I ask this kind of question I sometimes get an answer that is very strange for me. I am told that this is the Karma of the poor. What does that mean now? That materialized gold is only for rich people because they have the Karma to be rich? They think that the poor people do not deserve help because they did something wrong in their past life? No, this is not my logic, not my idea of helping someone.

I remember my school-time and that I was very interested in all kinds of magic tricks. I was even doing shows of up to two hours of magic tricks in which I practiced materializing things. It is only your hands that have to be quick. Oh, I did so many tricks, I also burned money and then materialized it again. This kind of show I can do and everybody can do it if he just trains his hands to be quick.

I do not believe in making gold from nothing and I think those who do, are like the sheep that I was talking about the other day. These materializations are then called miracles. I do not make miracles, I feel that this life is a miracle on its own. When a flower is blooming, this is a real miracle!

While I was talking this Ramona said I should be careful, maybe many people will turn away from you if you talk like this. But I replied that this is okay because I do not want to have sheep anyway. If people leave because of this I feel this is a kind of filtering. Those will stay who think on their own and realize that love is the way and materializing love should be our aim.

Is the physical appearance of your partner an excuse for cheating? – 12 Jul 12