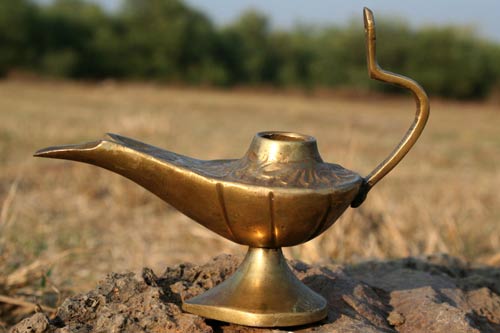 I thought I had made myself and my opinion about hope, belief, reality and magic quite clear in yesterday’s diary. There was however a sentence, or maybe just one word, that upset at least one of my readers: “Believing that the impossible will happen is either closing the eyes in front of reality or just stupid.” And as it is again about a sensitive topic and seems to some a rather harsh way to say things, I think another diary entry should be dedicated to this topic.

Today I just want to write about this one sentence because I already made it clear yesterday that I do encourage hope and that unexpected things happen. I still believe however that the impossible does not and cannot happen. What exactly is ‘the impossible’ that people believe in and that I am talking about though?

First and foremost it is those ‘miracles’ that religions, sects and gurus promise. As it is especially common practice among fake gurus, here are some examples of their claims: they let statues bleed, they materialize gold, they can exactly predict the future of anybody, walk over water, levitate in the air, be at two different places at the same time, make the blind see and the lame walk. I have stated this before and I do it again: everyone who claims to be able to do these impossible things simply lies or uses some kind of trick to achieve it. And then it is just cheating or fooling people.

For other people it is however not a guru, not an earthly, human person who can do this but God. But if this is why you believe in religion or God, if this is the meaning of religion, I will refuse it even more than I am already doing! I was once a believer both in religion and God but I think I was never in this dark area of belief where people use occult rituals and even offerings of blood to get God to do miracles for them!

One could think that nobody would like to be made a fool or get involved in such dark practices. Nevertheless however there are millions of people who follow such movements, religions and gurus! It does not even matter how educated they are – even westerners with master degrees and of the highest societies are seen running behind fake gurus with the hope of witnessing miracles or learning how to do those miracles themselves!

Having described ‘the impossible’, I now want to explain my use of the word ‘stupid’. I would never say in general that everybody who is religious or believes in God is stupid. Such a statement would be stupid, even if I think that some of the belief that I had when I was religious was stupid, too. Jokes aside, it is often understandable that people believe in religion: they grow up with it for example and know nothing else. Or they have a deep longing for security or love which they search in the outside instead of finding it in themselves. Others are really uneducated and cannot find explanations for what they experience – and that is why they follow people who promise miracles to save them.

What I believe is stupid however is if you know that you are getting cheated, if you know that something is impossible and that there is a reasonable, scientific explication but you still believe! Yes, then I would say you either want to close your eyes from reality or you are stupid. You will be the one disappointed in the end because your miracle will never happen! Or you will stay in your illusion, well knowing that it is an illusion, cheating yourself and your mind and maybe others around you, too.

The main thing is that you are free to believe what you like. But turning your eyes away from reality will be bad for you in the end, not for me.