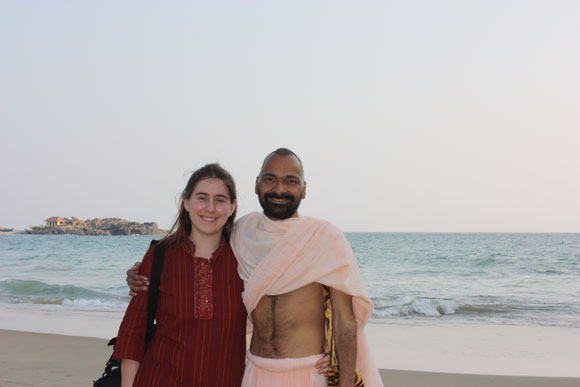 I described already that tourists here in India on their first days sometimes have the impression that there are many homosexual people in India. They see boys, friends, who hold hands, hug each other and walk closely arm in arm and think they are gay, because in the west, guys don’t do that. Somehow it is more usual that girls walk arm in arm with each other. Or, naturally, if couples walk like that.

In India, you will never see a couple get close physically outside on the road and not even inside the house, in front of family or friends. Physical contact happens when they are alone with each other. You can walk arm in arm with your friends of the same gender, not with your partner. Western people often see this as frigid or prudish behavior.

There are several more things that strengthen this impression. Whenever we bought tickets here in Kerala, be it for the boat ride for getting around in Cochin, the boat ride in Kanyakumari or entrance tickets for monuments and sights, there were two queues, one for ‘Gents’ and one for ‘Ladies’. The funny thing was that the person selling the tickets was always the same, selling tickets in turn, one to a woman, one to a man. What was really funny to us was, when we wanted to enter the boat in Kanyakumari and they separated us into two lines again in order to distribute the life jackets and go on board. This only led to a medium-size chaos inside the boat where husbands tried to get through to their wives to sit together with them.

The sense of this procedure was however, if I guess right, to protect women from being molested while standing in the queue. In a big crowd, where people press forward and push against each other, women often feel discomfort and are sometimes indecently touched by men who seem to find this in some way entertaining.

So it may be that to westerners, it seems frigid behavior and an unnecessary action to separate men and women in this way, but they may be also happy about it if they once experienced it in another way. However I believe that when people get more educated, this will also not be necessary someday anymore. On the other hand, Kerala is already the state with the highest literacy rate in India. The question of closeness between women and men also has a lot to do with what is rooted in culture. With time and education, this all will change but until then, westerners will keep on seeing Indians as prudish.

Value your Time, Effort and yourself – don’t let others take Advantage of you! – 23 May 12