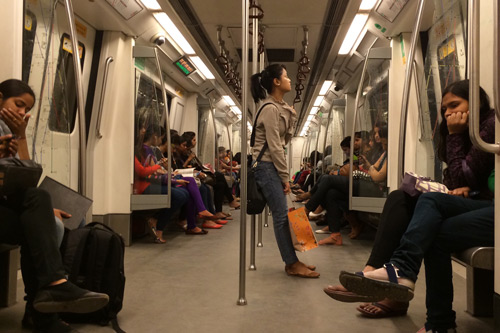 Last week I told you about the metropolitan cities in India where parents cling to tradition in order not to get lost in all the new ways that a modern life brings. While they are in many ways trying to be modern, especially the raising of daughters brings them back to tradition – and this can create quite some trouble! Let me tell you how.

Over the past months, I have met a lot of young Indian people and many of them from Delhi. We talked about a lot of things, among others the lifestyle that girls and young women have in Delhi. They go to study and after their university, they start working somewhere. They travel around Delhi by Metro and auto-rickshaw, they use the offers that the big town gives them and they enjoy their lives. There is however a problem: they cannot be open with their parents about everything!

Several of the young women who visited us told that they also went on dates. Many enjoyed spending their time with friends of both genders and some of them had had boyfriends in the past as well. They went to late-night movie shows and even stayed at their boyfriends’ places overnight.

Obviously, that was not something they told their parents! I say obviously because it is still very much unthinkable in India for unmarried young people to be spending the night together. And they knew very well their parents would not allow this and instead create a lot of problems for them from uncomfortable discussions maybe even to punishments like being grounded.

So instead, these girls told me very openly that they lied. They told that they had work for university or that they would be with their best girlfriend overnight whom the parents knew well. The truth would have made everyone unhappy, they explained. A lie saves them from a lot of questions, uncomfortable situations and they know they would never be able to satisfy them anyway. So why to even start a discussion? In their faces I could see that they did not feel guilty about these lies at all.

This cannot be right. It is not right from either side but as a parent, you should think about why your child would feel the need to lie to you. I believe parents are responsible for these lies, forcing them with their restrictions. What are we doing by forcefully holding on to outdated traditions in modern times? We create a gap in between parents and children. Your children, themselves young adults, know what you would not allow them to do. They also know what they could be doing. They watch movies and want to have the same freedom, especially in a town in which it would be so easy!

And most of all, girls want to do what their brothers do. Why do you let them roam around freely at night? Why don’t you call them three times if it is after ten in the evening in order to see when they come home? Why are you okay with the thought that they might have a girlfriend but not okay with the thought that your daughter might have a boyfriend?

By forbidding and prohibiting, you are making your children lie. Be open with them and talk about things. Give them more freedom and they will stick to the rules that you are really serious about. Most of all, they will be safe. Because they can come to you and tell you about their problems. Otherwise, all you get is lies!

People of Vrindavan and their Relation to God – 5 Oct 08

Business with Donations and Energy – 30 Jun 08