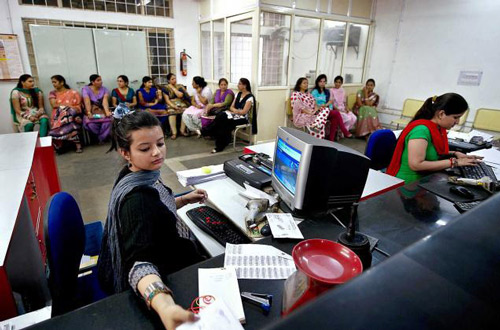 I yesterday explained how a lot of old traditions are the cause of current bad situations in the society, for example the pressure women experience after marriage with so many people expecting them to become mothers really soon. Some of my readers agreed but added: it is changing. I agree but only until a certain degree!

I can tell you however that for one, this is a tiny part of India’s population and that for two, the mentality has not changed as much as one would wish to believe!

Yes, Delhi, Mumbai and other big cities have already brought change for women. Parents give them much more freedom and they can explore life in a completely different way than girls and women on the countryside.

Apart from the fact however that this is a clear minority, even there, life remains unjust for those of the ‘weaker’ gender with traditions maintaining a high priority in the minds of parents, relatives and members of society in general! While boys can roam around freely, girls are kept in a protective bubble which keeps them not only safe but also isolated. They are discouraged from dating and if they do, parents keep a close eye on whom they meet. No late nights, sleepovers can happen only with the best girlfriend whose parents are known to be respectable people and she has the duty to report exactly where she is going.

It is a pretense of freedom. A demo version, not the full one. In most cases, it still expires at the point of marriage when a girl, educated and already in her career, is expected to yield to the wishes and needs of her new husband and his family. Because this is a tradition that is still hardly broken anywhere! ‘Respect your husband’ means do as he says.

And from that point, expectations are the same, the process that follows is the same and the pressure, pain and tears are the same. So no, the big cities have not got rid of such problems yet – in fact, this has brought up other issues which I may discuss next week.

You cannot love, have Sex with different People and not be jealous all at the same time! – 17 Mar 13