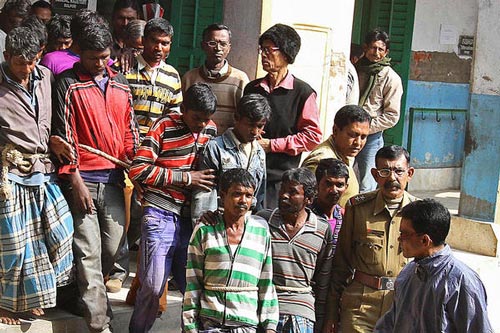 While I was writing about problems of sexual harassment and rape in India in the past week, another terrible incident happened. A brutal gang-rape in a village in West-Bengal, 180 kilometers from Kolkata. This time, it was no a random victim though. It was not a normal rape. It was a punishment, ordered by the village court. The judges were among the rapists.

The woman was 20 years old and had fallen in love with a man. In the eyes of her community, it was the wrong man, from a neighbouring village – something that the community of the village did not approve of. They found them together and dragged them together in front of a quickly called-in village court.

The girl’s family was asked to pay a fine of 50000 INR – a very big amount which they already knew the family would never be able to pay. When the family told that they could not, they decided on a horrible punishment: the girl would be raped by several men of the village.

She herself could not count anymore how many there really were but it was at least thirteen men. Of these men, there were several whom she called her uncles and brothers, who were close to her like family. The young woman’s family was even prohibited from taking her to the hospital for hours after the assault, although she was deeply injured and bleeding. When they finally made it there, they also filed the police complaint.

The police have arrested thirteen men, including the judges who had given the order for this ‘punishment’, this crime. They still resisted the arrest however and police had to call reinforcements to get the suspects.

It is one of the most shocking crimes of that kind we have read about, not because others were less horrible but because this was not a spontaneous decision of a criminal mind. These rapists thought what they were doing was justice, that this was what they should be doing!

West Bengal is the Indian state with highest number of crimes against women. Village courts, courts of elders make their own laws in remote villages and from such instances you can see what they think of women. What place women have in their society and how powerful men are.

Shock, disgust and more is what you can feel and it makes you wonder how there can still be people who say rape is a victim’s fault and not the fault of a sick mindset of men!