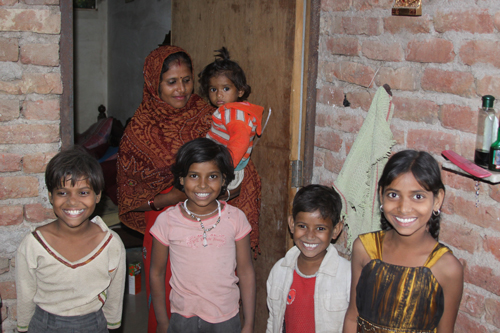 When the Birth of a Child is not a Reason for Joy: the seventh Daughter – 18 Aug 16

Yesterday we got the news that a few of our school girls have got another small sister. Obviously, with 250 children, there are all the time new siblings being born. Normally when you talk about a new life coming to this earth, you feel happy and celebrate. In this case however, we cannot really feel happy with this family – the parents himself are not. The reason is the same but different: it is their seventh daughter!

Oh, we have known this family for so many years and see their development with sorrow: the father is a mason who has already worked on our Ashram building, school building and restaurant building. His eldest daughter was among the first children at our school – and the next three daughters started in the years after that as well. In 2013 I introduced this family to you in my blog. In that time, they had five daughters already and we knew exactly why: they kept on trying to have a son!

The father is hard-working and has managed to save some money to build his home – but obviously it is quite a task feeding six children – and now another belly wants to be filled! We will be here to support the girls with their primary education – but there are other expenses that have to be covered as well!

We actually confronted the father with our concern and were surprised: he started crying and told us that he himself as well as his parents had already told his wife after the second daughter that two children were enough. He complained that everyone suspected him to be the one wanting a boy at all costs – but that in fact it was his wife!

She had even gone as far as to threaten him: if he didn’t make her pregnant again, she would get help by someone else! For her, the reason for not being full of joy about this birth is clear: it is ‘only’ another girl! Another girl to feed, who will have to be married and finally will leave home. No son who will carry on the family name, who will stay at home and earn money for the parents when they are old or whose wife would care for them!

It is unfortunately still like this here in India and this mentality is something which will still take a long time to remove from people’s minds! Girl and boy are not equal here. Parents may love their daughters but daughters and sons are never equal in their eyes. They say it clearly in front of the girls, too: we wanted a son!

I feel for these girls, I feel for these families who increase their poverty only by this wish for a male child. Your daughter is precious and lovely – don’t think she is worth less and don’t make her feel she should be anything else than she is!

Attention Seekers Get Healed by not Getting Attention – 16 Aug 10