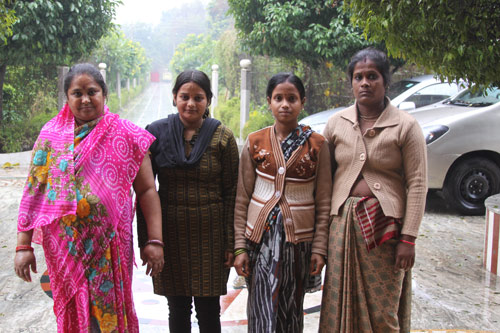 While writing mainly about sexual harassment of western women in India yesterday, I want to include those victims today who are facing this much more frequently: Indian women, those who live in this country and walk these streets every day. They are the ones whose cases don’t get highlighted in international media. Even the national media does not look much at their complaints. The problem is that it is just too ‘normal’.

I don’t want to talk about rape that much here as I want to talk about harassment. According to a report I recently read, 93% of rape cases happen with a person known to the victim, an act of domestic violence, with father, uncle, family friend or relative. I want to talk about that which happens every day out on the roads: the stares full of lust, the insinuating remarks, the hands that touch bottoms or even breasts in crowded buses, trains or shops.

Let’s go back to the beginnings of such harassment, the stares on the street. I told you that men look at my non-Indian female friends in an inappropriate way whenever I am out with them on the road. Their looks are missing respect and I have felt many times that these men are already raping that woman with their eyes! I once even asked one of such men: ‘Why are you staring?’ His answer was: ‘Hey, I am only looking!’ So he is ‘only’ looking, not ripping off her clothes!

Dear western women, while you are shocked when this happens to you, it happens much more often to Indian women. You can go to your embassy in the worst case, if you call the police, it will be taken seriously, if you even shout out, there will be more support for you than there will be for an Indian woman – because it has become nearly normal for them. Uncountable female friends in India have told me that they believe there is not one Indian woman who has not made this experience in her life.

It would be too much to say that every man who stares without any respect at a woman is a rapist. In all fairness, one cannot even say that he is a future rapist or a possible rapist. Still however the thought remains: when he is raping with his eyes while everyone is around, what would he do if there was nobody? What if he really got a chance?

Now however, it feels that there is a new wind blowing in the country. Women go to self-defense classes, you can see them shout down men who passed comments, you read about groups of women who dare standing up for their rights, you see them protest for their safety and security. We can see that things are moving and we hope they will move fast!

I will write in the next days further about the root of this problem and also will give safety tips for female travelers in India. In the meantime, stay safe everyone!