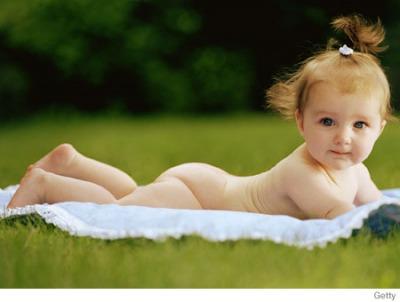 In the past weeks, I have again experienced something which was a topic the last time when Apra was born and just a few weeks old: the idea that nakedness, even when it comes to children, could be something shameful. It is, to me, the most absurd idea to say ‘Shame, shame!’ when a small child walks around naked!

Let me elaborate on this a little bit. We were confronted with this topic for the first time when Apra was very small. Instead of putting her in diapers the whole day, she often crawled around with just her dress on. The underwear we got with these dresses was usually too tight for her legs and disturbed her – so we took it off. A few times, someone who came by would look at her with wide eyes and say ‘Oh, shame, shame!’ Obviously, a child of a few weeks or months did not react at all to that but we did. We always explained, as nicely and calmly as possible, that there was no shame in a baby being naked, it was just natural.

People got to know and in our Ashram environment, this kind of words stopped completely. Of course, the older Apra got, the more often she was wearing full clothes rather than not but it is still her home – sometimes moving from one room to the other happens without any clothes on!

With the restaurant, a lot of new people have come to our place. Our new staff doesn’t know us that well yet and that’s how it happened the other day: we had showered in the morning and as most of Apra’s clothes are in my father’s cupboard, she came out of our room with nothing but her slippers on. We were moving towards our father’s room when one of our employees said the familiar words: ‘Ooooh, Apra, shame, shame!’

We stopped and turned, starting our explanation right away: there is nothing shameful in being naked! If you find a four-year-old girl walking naked from one room to the other in her own home shameful, something is wrong with you, not with her! We adults don’t walk around naked due to social conditioning but in reality, there is nothing more natural than a naked body! What you try to instill in my daughter is something I don’t want her to learn! You are talking about shame to a child or who doesn’t even understand the concept of shame!

If anything, she would enjoy walking naked because it feels good or because you tell her she shouldn’t. It is something one doesn’t usually do – so she would do it extra and on purpose if you teach her this. Without this kind of teachings, she would usually wear clothes because everyone does – without any bad feelings about being naked!

Slowly even our new staff members get the idea that we think a bit differently from others. That we are not as much tied in the Indian idea of shame. They will learn not to say such things even if they don’t understand or agree with our reasons.

But it makes you think about what we teach our children about our bodies – shame and guilt. Make a change. Teach them to accept themselves and be more natural. This will help them in life!