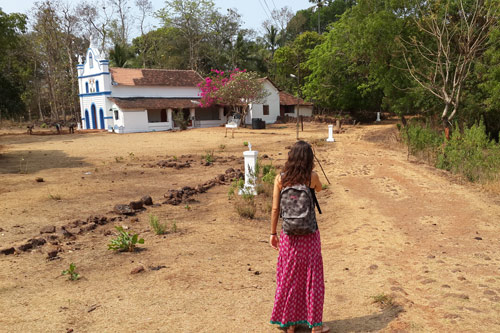 Yesterday I started writing about a very important topic: western women who fall in love with Indian men online and then come to India to meet them, hoping to have found the partner of their lives. While I am really always in favour of a positive attitude and daring to follow one’s feelings, I also recommend being careful in this case. We have just seen so many disappointments that I feel like trying to explain why this happens once more. Today I will direct my words to these western women again but tomorrow I will also write a few lines for the Indian men responsible for the disappointment.

I completely understand your situation. You are at an age where you have seen and tried a lot when it comes to relationships. You have had your share of love, sex and break-ups. Now you are mature, you know what you want and that is something serious, something profound and solid.

Maybe you have also heard of Indian culture and have heard good things about guys not fooling around and not having a lot of girlfriends but being steady in long-term relationships. Statistically, this may be true. You may however face a bitter reality when you actually come to India.

The man whom you have been chatting with is a young guy with little to no experience with women who just wants to have some fun before his parents will decide on a girl for him to marry in a few years. Now there is the opportunity to have this fun with a western woman, which primarily means to him ‘white skin and easy target’.

This may seem harsh and again I agree that there can be different cases but we have made this experience and have also seen such Indian men, not only the western women in this situation. For many men it is nothing more than that. They know you are sitting far away in another country, the chances are small that you will actually fly over and search for him. And they actually don’t think that it is that serious for you, either!

You are right that young men here in India don’t jump from one relationship to the other. Mostly because they don’t have any relationship at all! The culture is not open for any kind of relationship before marriage, for many families it is a scandal if their unmarried child has a partner and thus most probably sex before marriage! Boys get taught this but much more than that the girls! Most girls are very careful not to get a bad reputation by chatting about love with boys.

That brings you into the game: you are from one of those countries of which people think that they have ‘an open sex culture’. While it is correct that in your country people easily have sex and live together as partners in a relationship where you respect each other, many Indians think it is very different. I have been asked ‘So you go to the west, is it really easy to have sex there with anybody?’ and western women have told me how Indian strangers asked them ‘In your country, you have an open sex culture, right?’ They practically think that most westerners simply enjoy sex without attachment – after all, they are not married! They don’t consider that you actually put your feelings in there!

Before you get your hopes up in that direction however, you also have to realize that you are not marriage-material for them! The common Indian plan for life is that the parents arrange a marriage with a young Indian woman of their religion and caste that will bear them children whom they will raise.

Where do you fit in here? For most families, which are to a very big part believers in traditional values, you are not suitable simply by the fact that you are not Indian, not Hindu and not of their caste. Additionally you may already have passed the age that they consider right for getting children! The average Indian is very attached to his family and would not like to disappoint them. Men have left their Indian girlfriends whom they considered their big love of their lives only to please their parents and marry the bride they chose for them. They most probably won’t go through fights with their family in order to be with a foreigner who is not yet so sure herself either.

In the end, one can say that they just want to have fun and are not serious. If you come to India to confront them, they will simply be scared.

That holds true not only for young men! You may also find a married man who can tell you anything, that his wife died or that he is divorced, just to convince you to talk about love and sex with him. His marriage may not be very exciting and he may be spending a lot of time apart from his wife. He may be satisfied with just a chat or maybe a skype session. When you come to India however, they cannot meet you without their wife getting to know about it. Or they meet you just for a night, leaving you disappointed again.

Finally, I just want to remind you that the world of the internet is not real. I have a lot of ‘friends’ on facebook and you can be a mutual friend but that does not mean that I know them personally. I cannot guarantee for any of them, so please don’t think just because they are in touch with me, they are honest, morally correct or very good people.

Be careful what you do and where you put your heart. We will always be ready to welcome you here in India if you really want to try and get to know this man. Just remember that things may seem different than they are.

Indian men, as promised, I will have few lines for you tomorrow!