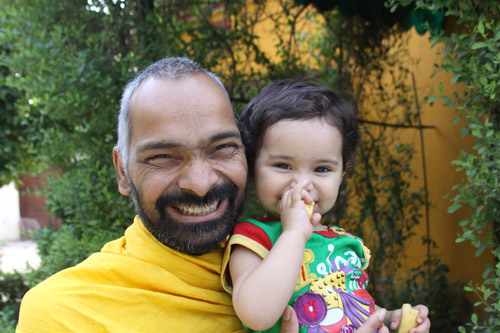 When I posted Ramona’s statement about expectations, which I gave you to read yesterday, on facebook, I added a line on my own, too, saying 'I very much wanted our daughter Apra to be born here but I would not want her to become that Indian woman of whom people expect so much.' And I just won't raise her that way. With a smiley, I sent this on the way and as expected had several people questioning whether I was Indian at all, why I didn’t want my daughter to become Indian and how I could, with a sane mind, say something like this.

People told me, just as they had told Ramona, that there were many women in big Indian cities who did not live according to such expectations. I have to obviously remind you that the majority of the Indian population does not live in metro cities like Delhi, Mumbai or Bangalore. Most people live in rural areas and in a very different culture of the higher class and higher middle class of the big cities! You cannot compare the thinking and mindset of women working as managers in high posts of international companies with that of the average woman in a small town or village. In a normal, traditional Indian family you will still see how the entire society keeps high expectations on the behavior of women.

Don't you know how much difference is being made in the same family when raising a boy and a girl? I once wrote a complete diary entry about exactly this topic. How many restrictions especially the girl has? Forget about having a boyfriend and choosing a life partner from their own will, they are not even allowed to choose what they should wear, where they can go or not! There are clear instructions for whatever she does and they start when she is young, increase when she is a teenager and reach a climax shortly before her marriage. Then she is ready to get married and move into another home where she will then get to know the expectations of another family, maybe slightly different, probably just as restricting.

Someone tried justifying all these differences by saying ‘God made women different’, not realizing that it could mean that men are the ones who are different as well. It is just a very normal thought in Indian parents and what many western friends don’t understand is that they don’t mean anything bad for their daughters! They honestly love them with their full heart but they believe it is their duty to raise their girls in this way. They truly believe that girls and women are different and they thus prepare them in this way for their lives, not realizing that they make them unable to take responsibility on their own, always trying to fulfill other people’s expectations.

That was where we finally come to my point in this whole discussion: I would never raise my daughter like a normal Indian family does. I would not like people having the same expectations on her as they usually have on an Indian girl. I am Indian but that does not keep me from opening my eyes to the truth and starting a change. Starting by raising my daughter to be a strong individual who can think and act on her own.