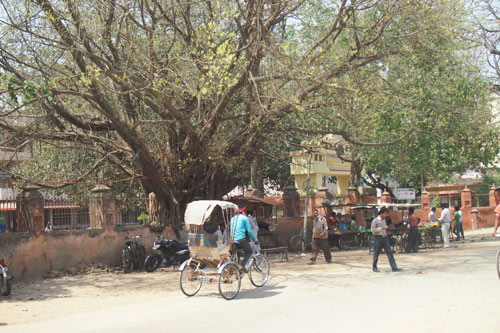 Yesterday I told you about an incident on Saturday, during our trip to Delhi, when I had to laugh about Indian politeness – a politeness that makes people quite often appear fake while at other times it makes you feel really good.

If you look at our experience in Delhi, you can see that this lady tried to be polite but didn’t mean it at all. She said I should pay whatever I wanted to but when I did exactly that, she was so unhappy that she phoned after we had already left her flat just to get the rest of the money.

Ramona had many similar experiences in the beginning of her time in India. Once on a celebration, she met a woman with whom she then had a nice conversation. She told her that she knew us very well. In the end, this lady invited her to her home. Ramona was very happy and agreed that she would come by as she had not made a lot of contacts yet in Vrindavan. She told us afterwards about this talk and asked us where this woman lived – but we didn’t even know her! She knew even when she said it that Ramona could never reach until her home, because none of us actually were friends with her, although she pretended to be as close as an old childhood friend!

On the other hand, such invitations can also be meant seriously! You can go to people’s homes in this way and they will feed you lunch, dinner, chai, snacks and sweets! Even if their home is untidy and they were not expecting guests, they could welcome you heartily!

Indians are known for their welcoming and helping nature and it is completely true as well. It lies in the nature of a typical Indian person to be not only polite but also invite people, be open, tolerant and feeling with others. So how come there is also this fake politeness, those words that are said to be nice while they are not meant at all?

I believe people know how ‘it should be’. They have this idea that they should be polite and welcoming. That they should invite others and should not ask for money directly, even when selling something. There are those ideas of values and morals and even though people don’t really feel that way, they act according to those unspoken rules, just in order to look nice. They pretend being nice, although their words are just a cover.

While I fully believe that we should be open, welcoming and full of heart towards each other, this is not the right way. If you don’t feel like it, there is nothing wrong in not inviting another person. And don’t confuse someone by telling you don’t mind whatever you pay if you actually want a certain price! This all will create problems for you afterwards!

Be honest, be nice, be lovely but don’t fake it!