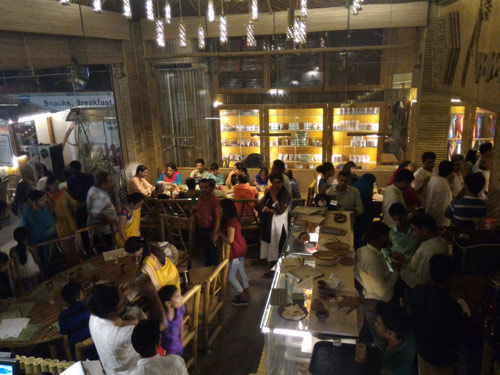 Indians hit their Children in public Places – and don’t feel guilty about it! – 8 Jun 16

In our restaurant, we witness again and again something which we have been working against for many, many years now: domestic violence against children. Unfortunately it is so common here in India that no day passes on which we don’t see a child getting hit or at least threatened to be hit. In the middle of the restaurant, where everyone else can see and hear it. Without shame or guilt. It is normal.

I knew this. I have always known it because I grew up here. For Ramona, this came as a shock which was revealed over time. In the past years, it was more an issue which we saw at schools. Obviously: we had sponsored children in other schools and corporal punishment was the issue we faced. We opened our own school and taught our teachers how to teach without violence. It is a never-ending topic as you have to repeat those talks, workshops and classes whenever new teachers join! It was direct interaction with teachers, not so much with parents – although we of course saw that, too.

With Apra’s birth and in the years that followed, we were strongly reminded that this was also a domestic problem in people’s families. Children of staff members at the Ashram were hit – and we opposed it. We created rules for staff not to use violence or even violent language at our Ashram. It was our small world here and we lived in here.

Now, with the opening of the restaurant, the outer world has come to us and this aspect of it is something we don’t like. Something we strongly dislike even – but which we cannot help or change except for making small changes in our own surrounding.

There are small children who are simply hungry, waiting for their parents to order and then get food. They get impatient, cannot sit still and play with the cutlery, the cloth napkins and crockery. Sometimes there is only the threat: ‘Stop it now or I will hit you!’, ‘Keep on doing this and you will get slapped!’ and so on. More than that, we can see the action right away: a slap in the face, on the hands, on the buttocks. And then talk just goes on.

It is normal, for everyone around them, too. Just we are sitting there with the feeling that we want to object, that we want to jump in and protect the child. The urge to tell them not to do this in our restaurant. In the end however, we are the ones who seem strange here. The ones who do it differently.

After all, our guests are all educated people. While the parents of our school children were from what society would call a ‘lower class’, we are speaking here about the upper middle and higher classes.

This, my dear readers, is culture. It is one of the dark aspects of our culture. I hope it will vanish someday. We will keep working against it anyway and just hope that others will follow so that we will see the day on which no child is hit in our restaurant!

Is Sex not for Pleasure, only for Reproduction? – 7 Jan 11