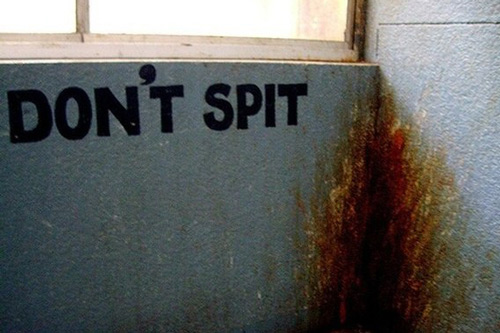 Today’s blog will be about a topic which is, for us, a never-ending story. We hope it will have an end one day but as it has been going on for years and decades, I am not sure how high our chances are in this regard! It is the problem of people chewing gutka, a mixture of betel nut, tobacco and flavourings. And the fact that they spit the red mixture out anywhere.

At first this was an issue which we had with our employees in the Ashram. They chew it and then they spit – leaving very ugly red spots everywhere. These look horrible and are difficult to clean. Obviously, we told everyone not to spit and best not to chew this stuff at all. We even educated them about the negative effects on your health. This habit is one of the main reasons for mouth cancer! It got a bit better over time although we still sometimes found a spot here or there.

With the opening of Ammaji’s Ayurvedic Restaurant, you wouldn’t believe it, this problem got fully new dimensions! First of all, starting with the staff. New people, a lot of them and a lot of them with bad habits! From the first day on we stated that we did NOT want to have any stains anywhere but soon realized that once more it would take effort to enforce this. So a fine was placed on anybody who would be caught chewing on the premises. It worked – and one employee left due to this! Crazy, isn’t it?

Well, now we had controlled our staff but there is one issue which is why I am not sure we will really ever be able to eliminate this from our premises: we often see that guests come into our restaurant and walk straight to the hand-wash-room or the toilet. Not for obvious reasons however! After they leave, have a look at the sink or the dustbin: you will find the white sink sprinkled red or their red spit in the dustbin!

Yes, it is educated people who come to eat in our restaurant. It is a strong bad habit however which they cannot leave! And unfortunately for the world around them, it doesn’t only affect them and their health but also the people who clean up after them!

Three days ago I had an incredible example of how strong this habit is – and maybe how little Indians care about keeping their environment clean: two guests came into the restaurant and while one of them was talking to the person sitting at the cashier, I looked at the one standing behind him. Believing himself to be unwatched, he simply spit out his gutka – in the middle of our restaurant, onto the floor at the cashier counter! Yes, onto our beautiful floor, spraying until our bamboo counter! I immediately got up and asked him, as politely as I could manage, to please clean that up! I asked a waiter to provide paper napkins and had our guest clean up his mess.

Spitting is a habit that I have not seen in this way in any other country or culture! Even people who do not eat gutka often have the habit of spitting. Often enough not only spitting anywhere outside but inside as well! Maybe children see their parents spit out betel nut and tobacco and that’s how they learn to spit, even if it is just spit and nothing else? Anyway, if someone spits in our restaurant and I see it, I will definitely tell them to clean up!

In this way I believe in making an effort in educating others – even if it is not what a usual business owner would do!

Do the Children know who is sponsored and who is not? – 6 Apr 09

Is there an Alternative to Religion, Atheism and the Newage Movement? – 7 Jun 12

Value your Time, Effort and yourself – don’t let others take Advantage of you! – 23 May 12