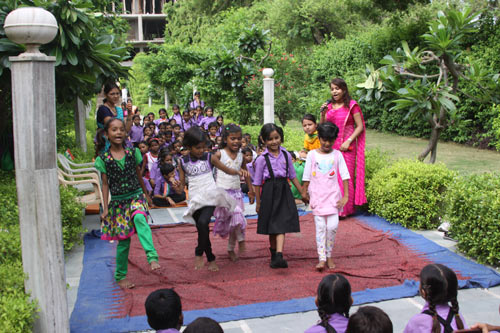 Whoever has been following my blog knows that every Friday I introduce my readers to a child of our school. For that, we go to visit those children in their homes, make a video of their house and family, have a talk with them and ask them about their situation. Unfortunately we often have the feeling that they are not really telling the truth. Being dishonest, at least about certain topics, is a habit for many people.

Little lies are actually not uncommon. We probably wouldn’t even get to know about many of them wasn’t there always the dishonesty in the financial question. Obviously, when we have a talk with a family, one question is for the breadwinner’s profession and the next one about his salary. How much does he earn and is there any other income for the family?

Now we do have a rough idea about the regular pay scale of their professions. We know how much a rickshaw driver usually earns, a mason, an ox-wagon-driver or a tailor. We have ourselves often employed people of those professions. What the parents of our children tell for their income is nearly always lower than the normal, average amount. We know that, accept their answer and just add a bit in our minds, knowing that doesn’t really make a very big difference.

It really doesn’t. If a person earns about 50 US-Dollar in a month but he tells us he only earns 40 US-Dollar or even only 30 US-Dollar per month, he still remains poor. Earning those ten or twenty US-Dollar more doesn’t make him rich, especially if we know that he has three or four children!

That is how we accept those little lies – but sometimes it just becomes too obvious! Their lies become so unrealistic that nobody would ever be able to live in the little amount that they tell – especially when you are standing in their home and thus can practically see what they spend their money on.

But what to do? We see that they are definitely not rich. We see that they are poor and would not be able to afford good schooling for their children. It does not make any sense to argue with them at that point of time. So we have to accept such lies – but we tell you about it.

Many poor people show themselves poorer than they are, if they think they can get a benefit from it. It is normal and understandable. But interesting as well – a habit of small dishonesties. I think it is the base for being dishonest in bigger and more important matters as well!