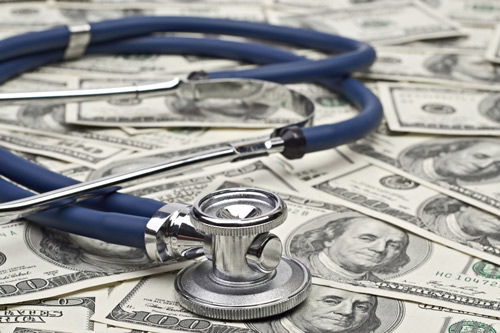 So today I have been, after quite a long time, to a doctor here in out next-biggest town Mathura. I once more got to see a system which shows that even in healthcare it is not really important how ill you are but how much money you have!

Before you ask me with too much concern why I had to go to the doctor, I can tell you that it was nothing serious or life-threatening! No, not at all – similarly to Ramona not too long ago, I now have a small spot on the back which has been itching for several days and doesn’t go away with our regular lotions. So I decided to show it to the same dermatologist. Ramona came along, as she knew him and the procedure there already. We walked up to the reservation counter and told my name and age for a consultation. Ramona added that it was an emergency and instead of the 300 rupees which you would normally pay, she handed over a 500-Rupee-note.

Oh yes, that’s how it works here in a lot of places! There is a regular fee and then another one, a higher one, for quicker access to your medical consultation. You get to see the doctor faster if you pay a bit more. Normally, that is called ‘emergency’ but obviously anybody uses this option who doesn’t feel like waiting!

The past times when Ramona had been to this doctor the extra two hundred rupees brought her in right after the next customer. This time she asked ‘So we will be next’ but the lady smiled and answered ‘No, it will take fifteen minutes’. Oh? We asked how come, we had paid for emergency access? ‘Yes, but there are two emergency cases before you!’

I joked with the offer to hand her another two hundred rupees to get in first but of course she does not have the authority to do that – and to upset another customer who had paid 500 rupees for getting in quick!

But this is where the system is simply wrong: what about all those people who can only pay 300 rupees? Each time one of the 500 rupee patients come, they are put back! That easily increases waiting time multifold, making it hours for them until they get to see the same doctor that others get to see within fifteen minutes!

This is however not only an Indian issue – only the system in the west is a bit different! In Germany for example, there is a general health insurance which is covered by the state and then there is a private insurance which is for those who are self-employed or earning an amount surpassing a certain threshold. And every doctor prefers treating those private patients because they can charge more from their insurance! Oh yes, they get better treatment, quicker access and even better doctors in hospitals than those who have general health insurance!

It is a sick world in which there is a preference in healthcare for those who have more money, by the same doctors and hospitals! I don’t want doctors to work for free – they have earned their money by helping others. However we need to find a way to get needed care to everyone, also those who cannot pay for it. Extra or at all!