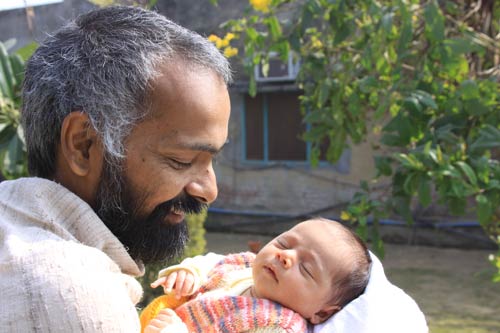 The days are passing by and today, on 9th February 2012, our daughter Apara is already one month old. It is incredible how fast time has passed and with every day, she seems to learn something new and develop a little bit further. She has gained about one kilogram since she was born! On some days it looks like her skin just got a bit darker and on other days she looks nearly as fair as her mother. Now she makes a lot more sounds than just some days ago – some sounding like a real giggle already , some as though she is clearing her throat and others can be clearly compared to the noises we do while stretching us after waking up! We are all just as much in love with her as we were the first day if not even more! I have said several times that this is the happiest time of my life. And I feel like I deserve it!

Really, I think I do! I have lived a good life and I was always honest. I believed in religion and I was honest about it. In that time, whenever I could help people in any way, I did. I tried to help with religious ceremonies for example but also a lot with advice and simply by talking to people. In the process of leaving religion I was honest about the changes in me and told people around me why. And now, when I am sure that I don’t belong to any religion and that I feel great without, I am honest about it and tell you openly why.

I have lived my life with the principle of being honest. In this way I honestly shared what I felt and shared the love that I had in my heart with the people around me because I felt this would be the right thing to do. And now that I am so happy I have the feeling I deserve it.

I was also always successful. I was successful in my school time – I had good marks and I understood what was being taught. When I was living the life of a guru, I was successful with my work, preaching the scriptures. When I did my retreat in the cave, I successfully completed it. I feel my consciousness developed further and my inner voice showed me another way. I did not hesitate to sacrifice the material success that I had as a guru and decided not to live as one anymore. Since we are running this charity, doing business and living without religion, we have also been very successful. So I believe you will not only be happy but also successful if you live with honesty and love. And then I say: I feel that I deserve it.

It is funny that a statement like this can make some people feel strange and as if I should not have said that. I ask them ‘Aren’t you happy?’ You will actually find only few people who straight away say ‘Yes’ to that. And if you ask those few ‘Do you think you deserve it?’, there will only be very few to say ‘Yes’ and add something like ‘I worked hard for it’. Most people actually cannot say that they are happy and if they go that far, they hesitate to say that they deserve it.

I think the main problem is that really most people think they don’t deserve to be happy. They actually somewhere inside themselves have the idea that they should not be happy at all. That is why they don’t talk about the beautiful things in their lives. They rather concentrate on all those things that are not good. They see the negative things in their lives. Be positive and see the bright side of your life! I guess most people would discover that there are many reasons in their lives to be happy!

If they go that far and say loudly that they are happy however, most people then hesitate to go on and say ‘I deserve it’ because they think it would look proud and as if they were showing off.

I don’t think so. You are not saying that another person should not be happy. Everyone has the right to be happy. See this and understand that it is a healthy confidence in yourself that lets you say ‘Yes, I am happy and I deserve it!’

If you know what you did in your life and if you live it with awareness and in love, don’t be shy to express your happiness. I will definitely tell anybody asking me how I feel that I am extremely happy here with my little daughter and that I believe we all deserved this happiness.

Storytelling of Past Lives – Something nobody can Prove – 10 Jun 09

What does Fear of God bring you? Good Morals or mental Problems? – 18 Jun 13