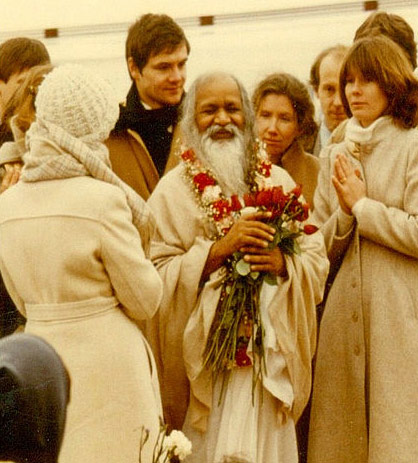 I recently gave a chakra workshop for the first chakra, the root chakra. I talked about knowing one’s roots, told how important it is to be connected with mother earth and explained the necessity of being grounded.

I mentioned a few examples for people who are definitely not grounded and told the group that there are many yogis who are actually trying to fly. They believe this would in some strange way bring peace to this earth. The movement that created and spreads this theory was founded by Maharishi Mahesh Yogi. He developed a meditation technique called ‘TM’, Transcendental Meditation, which is supposed to make you fly.

On my journeys in the west I have heard of Transcendental Meditation and have met many people who teach or practice it. They are all fascinated about flying but when you ask them whether they have had success in flying, you always get the answer that they have seen pictures or know someone who has seen someone else fly. I never met anybody who could fly himself or had even seen it himself.

Whenever I heard about this idea, I had to smile and thought about how many ways there are to fool people.

Recently friends recommended a documentary about this movement and we watched it together. It is called ‘David wants to fly’. I would really recommend this film to anybody who would like to understand more about Transcendental Meditation by Maharishi Mahesh Yogi.

In this movie, there is a young student who searches inspiration for his first movie and finds out that one of his idols, the Hollywood film producer David Lynch, is a follower and big fan of TM. He gets in touch with him and with his interest manages to get close into the group, travels to meetings of the organization in the US, to India for the guru’s funeral and to see what is happening there. He slowly discovers that there are many aspects of this organization that are not really as nice as it sounded in the beginning and his interest in meditation shifts towards an interest to find out more about these dubious parts of the organization.

The movie shows the two former Beatles members who are still alive, Paul McCartney and Ringo Starr, at a program organized by David Lynch. I mentioned two days ago already that they were connected with this movement and helped it to become popular. Hundreds or thousands of people went to the Ashram that they had been to and this was Maharishi Mahesh Yogi’s Ashram.

The student directing the movie, David Sieveking, has interviews with many different people and this makes the documentary really very interesting. The organization has a hierarchy and everybody who pays 1 Million Dollar is eligible for a course to become the ‘Raja’, which means king, of a country. In the movie you get to see several of them and I really had to laugh, seeing that they have a special getup, with a crown on their head and playing to be kings. The king of Switzerland was asked in an interview why Maharishi Mahesh Yogi never demonstrated publicly that he could fly. The answer was that he was too humble.

The training for learning to fly is to sit in Padmasana, the Lotus Seat and jump. At this point of the movie we all could not stop ourselves from laughing. It looks very funny how those students jump as high as they can, as if they were frogs, and also as fast as they can and get honoured for being the best although nobody manages to actually fly.

Another interview showed a more serious aspect. They talked to a man who had donated more than 150 Million Dollar to this movement and was disappointed that nothing actually happened with this money. He expected a big center to be built where the 10000 yogic flyers would meet and create world peace. I did not quite understand how this should happen anyway but this is what the basic idea had been: defying gravity and floating in the air for world peace.

Maharishi Mahesh Yogi himself said he had renounced the material world and lived in abstinence in order to be a real spiritual man and yogi. He was however not always very strict with this idea. The documentary shows the interview with a woman who had sex with him and talked freely about it. For her it was as if she met Jesus until he started to be interested in others at the same time. According to her, when she asked what would happen if she got pregnant, he answered ‘Get married to someone, quick!’

After watching this movie I wondered about who would give money to this nonsense? Who would like to become a king of a democratic country, who would be interested to learn flying? There obviously are people who do! They told they needed 400 Million Dollar for building a TM center in India and 200 Million were already collected. This center was never built but they had made the money.

I just and only want to recommend everyone to stand with both feet on the ground of this earth. Why do you want to fly? God gave this job to the birds, let them fly around while you use your legs! Work on peace in your own heart and you will do a much better contribution to world peace than by jumping in the Lotus seat, waiting to actually levitate someday.