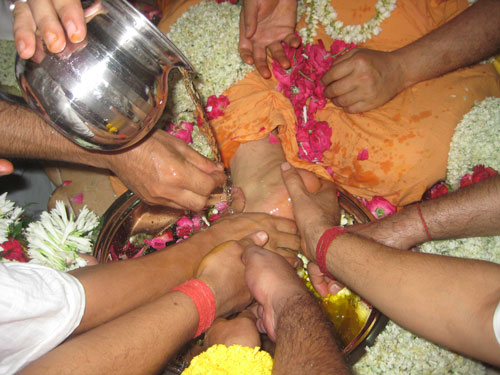 The scriptures on which the tradition of having a guru is based tell that a guru is on the same level or even higher than God. This means that it would be a big sin to listen how someone says something bad about your guru. Whatever he does can only be right and that’s why you should either make the person stop talking negative about your guru or close your ears and not let any such words enter your mind.

Hinduism tells that you can only reach your goal of liberation through a guru – so everybody should have one such person about whom they should never hear anything bad. They will wash his feet, just like they wash the feet of the statue of God. They bow to him as they bow to God and they devote themselves completely to him.

In some traditions of Hinduism, followers are told to devote their mind, money as well as their body to the guru. Some gurus take this literally and ask their followers to actually give them their bodies. Some former disciples of Asaram are now telling how he often talked indecently, asking them to surrender themselves literally as it is written in the scriptures!

This is not only Asaram, I have heard many stories of communities where a new wife, when she marries into a home, first has to pay a visit to the guru before she can sleep with her husband. She is given to the guru just like you would offer food at the altar – and he will sleep with her, bless her and only then the husband and family will welcome her in their home! This is still happening in India and why? Because a guru is god for them!

A long time ago, I had a friend who also went to give lectures like I did and who was in the role of a guru as well. He was married and about 40 years old but when he came to a certain town, his organizer donated him his 17-year-old daughter! What did he do? He left his wife, married this girl and now has children with her!

Faith has created such customs. Religion is the base for the crimes committed by gurus. People are taught from their childhood that the guru is god. He cannot do anything wrong and you are supposed to obey whatever he tells you to do. If anybody wants to tell you that it is wrong, make him shut his mouth or just don’t listen. Ignore or run away from criticism, give up on your own thinking.

Asaram’s story came out because of one young girl’s bravery. Many such stories all over the country stay in the hearts and minds of the victims. Fear, crime and suppression – that is what religion and those scriptures have brought us.