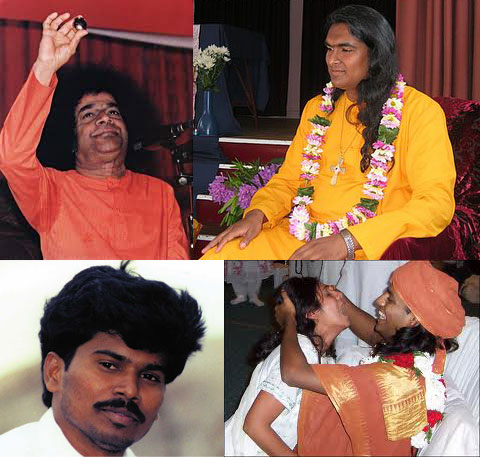 Yesterday I described that type of guru whose only task it is to give blessings. He is practically doing nothing. Today I will describe one type of guru who does something – and you probably read before that I don’t approve of what exactly this guru does.

He is this kind of guru who claims to have magic powers, who tells people he has Siddhis, who attracts them by showing miracles or telling of miracles he allegedly performed. He is the kind of guru who flies, makes statues bleed, materializes ashes, materializes silver and gold, reads other people’s minds, knows the future, heals cancer and AIDS, makes the blind see and the lame walk.

I may have forgotten some other great abilities that such gurus claim but I think you already got a pretty good idea of what I mean. This type of guru claims anything that could bring him more followers and in the end more money.

Small miracles are performed for people with little money, rich people get to see bigger ones. These gurus have no knowledge about scriptures and in general nothing great to tell any of their disciples. If they had, it would not be necessary for them to show magic tricks to impress others. They take their ‘wisdom’ from books of others, mix it together a bit and present it, if they ever want to present something. Mostly however they just make a big show and try to impress people.

These gurus know exactly that they cheat their audience. Of course, you know that you only make others believe that you materialized gold – in reality you were hiding it in your handkerchief the whole time! How would you not know you are fooling others?

Such gurus play with the greed of religious people who want to believe in superstition. They lure them in, show them their ‘siddhis’ to make them more and more greedy for success, for money, for whatever they want and actually suck their money out of them. Look at those gurus and you will see that most of them are big. Their show works best when they are big and they even hire people to show that they already have a mass following. And in this way they themselves get rich, accumulate tons of gold and just make ridiculous amounts of money.

The list of these gurus is long. Sathya Sai Baba was probably the biggest name among them but there are many more. Vishwananada, Nithyananda, Kaleshwar and many many more.

This type of guru is the one who can be clearly and easily identified as a fake guru and I think they have the lowest morals of all. Instead of using the trust and faith that people have in them to teach them how to take responsibility for their own lives, they keep them in the dark, make them dependent on them and keep them like blind sheep who can only follow what they are told.

No, this type of guru is not one whom you should ever follow. He has low morals himself because he cheats his followers. Consciously and with full intention. Only to enrich himself.

Unfortunately there are still too many of these gurus and too many people who enjoy following such men and women.

Can a positive Attitude save you from Food Poisoning? – 1 Nov 15