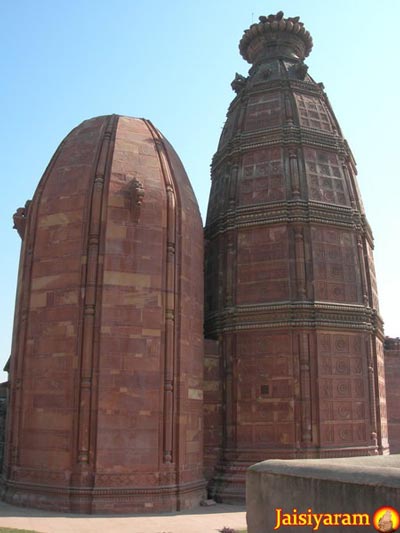 On the way from Vrindavan to Mathura, before you reach the Pagal Baba Ashram, there is a Hanuman temple called ‘Luteria Hanuman’. In my childhood we used to go there often and we were always told the story of the temple: a group of robbers prayed to God Hanuman for the success of their next plan. If their robbery was successful, they would donate half of the money to Hanuman. They were lucky in their mischief and kept their word. They donated half of what they had got to the temple which has ever since been known as ‘Luteria Hanuman’, the Hanuman of robbers.

When you walk the Parikrama Marg, the pilgrimage way of Vrindavan, you will come by the oldest temple of Vrindavan, the temple of Madan Mohan Ji close by the Yamuna. In older times the Yamuna flew by that temple, just at the Ghat, the stairs leading down to the river. The flow of the river has changed though and today the river is further behind the temple. This temple has a similar story.

It is a very high temple and it is said that there were two big golden pots standing on the very top of the temple. A thief once came into the temple and prayed to God “If I have success in stealing those two pots, I will give you one of them!” After this prayer, he waited for it to get dark outside and successfully climbed up the temple wall to reach to the golden pots. He then jumped down from the top of the temple directly into the Yamuna and right away donated one of the pots to the Goddess Yamuna by dropping it into the river.

I don’t want to talk about the question whether these stories can be proved historically. They could be fully or also only partially true. If you ask any local person in Vrindavan however, you can hear these stories and I grew up with them. As I have travelled a lot, I know that such stories exist nearly everywhere. There are temples, there are treasures and there are thieves who are in some way very honest when it comes to their religiosity. Whenever we hear such stories, the robbers seem to be very devoted people, going to temples, doing ceremonies and worshipping. In those stories they always keep their word in front of God. They always donate to Gods and Goddesses whenever they were successful in their robberies or when they killed their enemies. I am each time astounded by the honesty of those liars, robbers, thieves and murderers.

If you notice what exactly happens in those stories, it is also interesting that religion covers up for all those crimes! The story is about someone stealing or murdering and in the end everything is fine. Why? Because the temple, God or religion got money! Through this, every crime is justified. Even if you are a criminal, it is fully fine, as long as you are devoted. These stories are spread all over the country. Is this what religion wants to teach us?