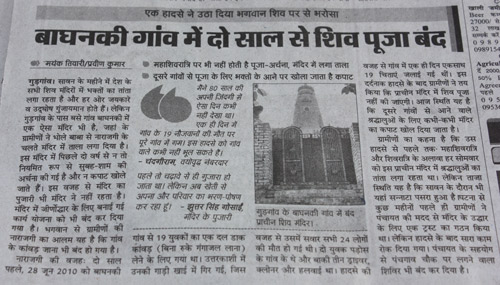 It is now the month ‘Sawan’ or ‘Shraavan’ according to Hindu calendars, the monsoon month. It is considered as a very holy month and there are a lot of rituals and ceremonies that people do in this time. One tradition is to go to the river Ganges, get water and bring it to a Shiva temple to offer it there. This is how every year thousands of people make a big pilgrimage to the Ganges and back.

Last week I read about a village in the state Haryana that broke with this tradition. They had a Shiva temple in their village and every year a whole bus went from that village to the Ganges and back. Two years ago however the bus had an accident. In this accident the whole bus came off the road on the way back to the village and all 24 people of the village who were in the bus died. The whole village decided that there can be no God who lets this happen, that so many pilgrims die and even with the holy water in their hands! So they closed down their Shiva temple, stopped worshipping and don’t do any pilgrimage in this time anymore.

There are more such stories of people losing their faith in God after tragic events. Every year at bigger religious events, celebrations and on holidays, there is some temple or place of worship where too many people come together and for some reason they start running away, pushing each other, then some fall down, others run over them and there is a big mass panic. Many people die in such human stampedes which often abruptly ends the belief of their relatives.

Those are big events that kill the belief of many but there are also single accidents in which only a few people start doubting God. It happened to me, too. When my sister died in a car accident, it was a turning point in my life that brought me away from my belief in religion.

But why do we have to wait for an accident? Why do we need something drastic, tragic to happen for this change?

I recommend just looking at the tragedy of others to see that life is not predictable. You cannot make an astrological chart and predict the time of death of a person. You cannot look into the future and you cannot change anybody’s fate by telling them horror stories about when they are going to die.

You also cannot save yourself by trusting in God. All those people who were in that bus were faithful pilgrims. All those who were at those big temples and were run over by the masses were religious people. They all believed in God.

If you have trust in God, it does not mean that you can do anything and you won’t die. You cannot drive drunk and think that nothing will happen because God is with you.

It may seem a gloomy, negative opinion to you what I am writing but it actually is not. Once you go away from that belief, you will realize how liberating it is when you can take responsibility for your actions and their consequences yourself.

My Friendships are based on Love, not on common Thoughts – 28 Jun 13