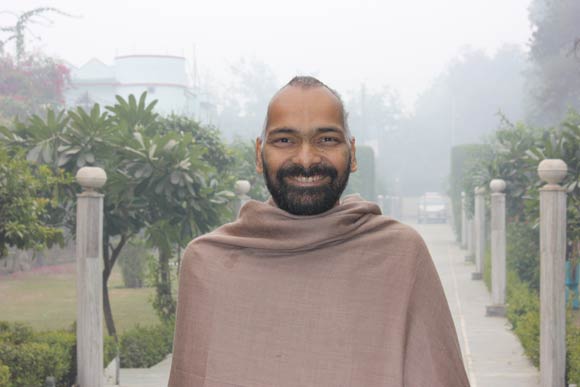 If you usually read my diary, you may have thought that I would see myself as a non-believer. I always say I don’t believe in any religion and I write a lot against different superstitions. One person who sees himself as a non-believer recently said: ‘It is nice that you write against superstition but you spread it yourself! You yourself tell others that you believe in Mantras!’ Another time I met a person who criticized me ‘You don’t believe in religion but you believe in God! A real atheist does not believe in religion and not in God either!’

I further thought about the question what God really is. He is your wishes. If you wish for him to exist, he is there. Our wishes create God. I don’t say God has any certain form, any certain colour or any certain name. He does not exist in a certain time or place. It is a creation of humans to imagine him clothed in a certain way or having names like Krishna or Allah. God is a creation of our wishes. Believers say God created the world. But I believe human created God and had the wish for him to be the creator of this world. For the believer, this is reality.

For me, a Mantra is a prayer and a prayer is a wish. When I say a Mantra and pray for someone or for myself, the words I say are my wishes. And I say God is wishes, too.

Maybe a non-believer would not say ‘God bless you!’ or greet someone with the name of God because they say they don’t believe in God. But don’t they say ‘Good morning’ and ‘Good night’? Don’t they wish someone best of luck or a happy birthday? Don’t they send their best wishes and greetings to others?

If so, I want to tell them that in the wish ‘Good morning’, the wish that the morning will be ‘good’ is God. When you wish someone a happy birthday, the other one knows that it is his birthday but you make a wish that it may be happy, too. So this wish is actually God!

Even the title ‘non-believer’ is very strange for me. You cannot believe in nothing at all. You definitely have belief and trust in something or someone, be that yourself, your father, your partner or your children! There will be something you believe in! How can you then say that you don’t believe?

When you call yourself a non-believer you already prove that belief is God. You don’t believe in God but through that statement you prove he exists in some form that you can believe in or not. I always say that love, soul and God is one for me. We can add wishes, belief and trust in that, these words are also simply God. Your wishes create God.

Writers: feel honoured when someone copies your Content! – 1 Sep 14

Can a Dog be Untouchable? – Birthday of Mahatma Gandhi – 2 Oct 10